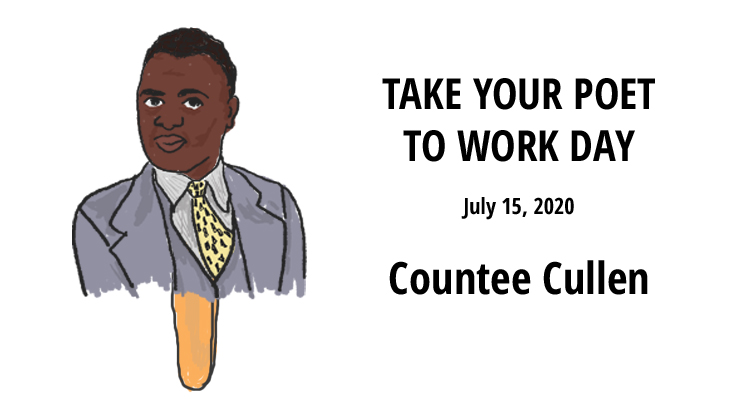 Take Your Poet to Work Day is coming!

We celebrate Take Your Poet to Work Day on the 3rd Wednesday in July. In 2020, that’s July 15. To help you play and celebrate with us, release new poets each week in a compact, convenient format you can tuck in your pocket, tool belt, or lunchbox.

We started our celebration seven years ago, and have been adding poets ever since. This year, you can bring Lucille Clifton, Countee Cullen, and Tania Runyan (our only living Take Your Poet to Work poet, and this year’s official Tweetspeak Poet Laura).

You can choose your poet from our full collection: Countee LeRoy Porter was born in 1903, his birthplace uncertain. He reportedly claimed to have been born in both New York City and Louisville, KY. When he was 9 years old, his grandmother, Amanda Porter, brought him to Harlem. He stayed with her until her death in 1917, at which time he was taken in by the Rev. Frederick A. Cullen and his wife. He eventually took the Reverend’s last name as his own. He was writing poetry at least as early as high school, during which time he won a poetry contest at his school in the Bronx. He later attended NYU and won second prize in the Witter Bynner contest for “The Ballad of the Brown Girl. He went on to earn his Masters in English from Harvard and published his first poetry collection, Color.

Cullen married Yolande Du Bois, daughter of W.E.B. Du Bois, in 1928 in a major social event of the African American elite community. The marriage ended after just a few years after Cullen expressed a preference for men. His work was heavily influenced by the Harlem Renaissance and the Negritude movement. He published three other poetry collections, including The Ballad of the Brown Girl, Copper Sun and The Black Christ and Other Poems. His use of religious imagery was controversial, including comparisons of lynching with crucifixion. Cullen also published a novel and in his later years wrote plays. He taught language arts at Frederick Douglass Junior High in New York City, where he taught James Baldwin.