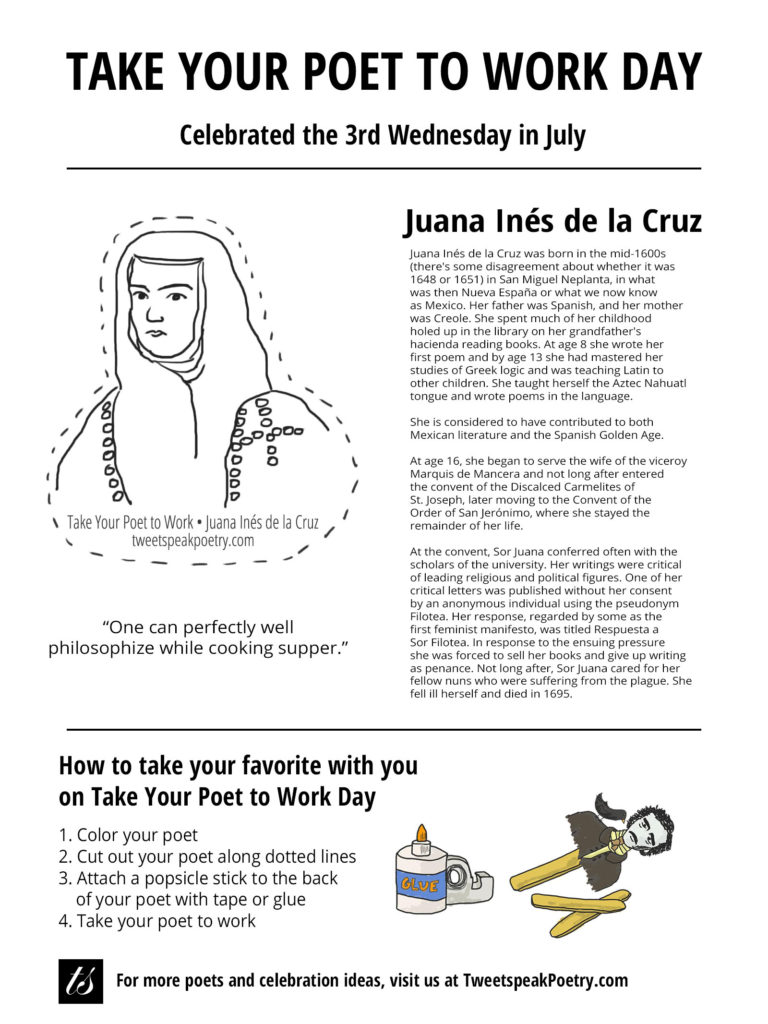 Juana Inés de la Cruz was born in the mid-1600s (there’s some disagreement about whether it was 1648 or 1651) in San Miguel Neplanta, in what was then Nueva España or what we now know as Mexico. Her father was Spanish, and her mother was Creole. She spent much of her childhood holed up in the library on her grandfather’s hacienda reading books. At age 8 she wrote her first poem and by age 13 she had mastered her studies of Greek logic and was teaching Latin to other children. She taught herself the Aztec Nahuatl tongue and wrote poems in the language.

She is considered to have contributed to both Mexican literature and the Spanish Golden Age.

At age 16, she began to serve the wife of the viceroy Marquis de Mancera and not long after entered the convent of the Discalced Carmelites of St. Joseph, later moving to the Convent of the Order of San Jerónimo, where she stayed the remainder of her life.

At the convent, Sor Juana conferred often with the scholars of the university. Her writings were critical of leading religious and political figures. One of her critical letters was published without her consent by an anonymous individual using the pseudonym Filotea. Her response, regarded by some as the first feminist manifesto, was titled Respuesta a Sor Filotea. In response to the ensuing pressure she was forced to sell her books and give up writing as penance. Not long after, Sor Juana cared for her fellow nuns who were suffering from the plague. She fell ill herself and died in 1695.

And when the blows refused to end,
and my surrendered heart to mend—
in the final throws, in the blood’s last sigh—
a strange magic rescued me just then.
I came back. But why should I live? Why?
For who, in love, has been luckier than I?

— from “The Ripcord of Love” tr. by Ada Limón & Cyrus Limón

Get your own Juana Ines de la Cruz Take Your Poet to Work Printable that you can print, color and cut out for the big day.