We believe there is poetry in the workplace; it’s just a matter of tuning your ear to it. We’re also fans of bringing poetry to the workplace. Or better yet, bringing poets to the workplace. Wouldn’t it be great if you could take the world’s most beloved poets along with you to work? Think of how envious your coworkers would be if T.S. Eliot were to ride around in your tool belt pouch all day.

To help you play and celebrate with us, we’re releasing poets each week in a compact, convenient format that you can tuck in your pocket, tool belt, or lunchbox. We’ve given you Sara Teasdale and Pablo Neruda. Last week, we released our first collection, The Haiku Masters: Matsuo Basho, Yosa Buson, and Kobayashi Issa. 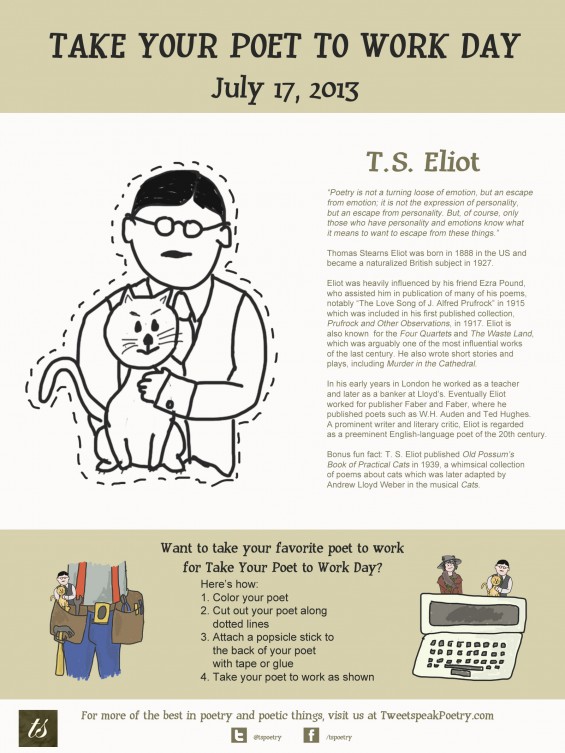 Click here for a downloadable version of  Take Your Poet to Work Day – T. S. Eliot that you can print and color.

Perhaps you could bring your copy of The Waste Land and read aloud to your coworkers during your lunch break. Thomas Stearns Eliot was born in 1888 in the United States and later emigrated to the UK, where he became a naturalized British subject in 1927. As a child with some physical limitations, he found himself socially isolated and often turned to books.

Eliot was heavily influenced by his friend Ezra Pound, who assisted him in publication of many of his works, notably “The Love Song of J. Alfred Prufrock” in 1915 which was included in his first published collection, Prufrock And Other Observations, in 1917. Eliot is also known  for the Four Quartets and The Waste Land which was arguably one of the most influential works of the last century. He also wrote short stories and plays, including Murder in the Cathedral.

In his early years in London he worked as a teacher and later as a banker at Lloyd’s. Eventually Eliot worked for publishing house Faber and Faber, where he published poets such as W.H. Auden,  Stephen Spender, and Ted Hughes. A prominent writer and literary critic, Eliot is regarded as a preeminent English-language poet of the 20th century.

Bonus fun fact: T.S. Eliot published Old Possum’s Book of Practical Cats in 1939, a whimsical collection of poems about cats which was later adapted by Andrew Lloyd Weber in the musical Cats.

The Naming of Cats

The Naming of Cats is a difficult matter,
It isn’t just one of your holiday games;
You may think at first I’m as mad as a hatter
When I tell you, a cat must have THREE DIFFERENT NAMES.
First of all, there’s the name that the family use daily,
Such as Peter, Augustus, Alonzo or James,
Such as Victor or Jonathan, George or Bill Bailey—
All of them sensible everyday names.
There are fancier names if you think they sound sweeter,
Some for the gentlemen, some for the dames:
Such as Plato, Admetus, Electra, Demeter—
But all of them sensible everyday names.
But I tell you, a cat needs a name that’s particular,
A name that’s peculiar, and more dignified,
Else how can he keep up his tail perpendicular,
Or spread out his whiskers, or cherish his pride?
Of names of this kind, I can give you a quorum,
Such as Munkustrap, Quaxo, or Coricopat,
Such as Bombalurina, or else Jellylorum-
Names that never belong to more than one cat.
But above and beyond there’s still one name left over,
And that is the name that you never will guess;
The name that no human research can discover—
But THE CAT HIMSELF KNOWS, and will never confess.
When you notice a cat in profound meditation,
The reason, I tell you, is always the same:
His mind is engaged in a rapt contemplation
Of the thought, of the thought, of the thought of his name:
His ineffable effable
Effanineffable
Deep and inscrutable singular Name.

Macavity’s a Mystery Cat: he’s called the Hidden Paw—
For he’s the master criminal who can defy the Law.
He’s the bafflement of Scotland Yard, the Flying Squad’s despair:
For when they reach the scene of crime—Macavity’s not there!

Macavity, Macavity, there’s no on like Macavity,
He’s broken every human law, he breaks the law of gravity.
His powers of levitation would make a fakir stare,
And when you reach the scene of crime—Macavity’s not there!
You may seek him in the basement, you may look up in the air—
But I tell you once and once again, Macavity’s not there!

Macavity’s a ginger cat, he’s very tall and thin;
You would know him if you saw him, for his eyes are sunken in.
His brow is deeply lined with thought, his head is highly doomed;
His coat is dusty from neglect, his whiskers are uncombed.
He sways his head from side to side, with movements like a snake;
And when you think he’s half asleep, he’s always wide awake.

Macavity, Macavity, there’s no one like Macavity,
For he’s a fiend in feline shape, a monster of depravity.
You may meet him in a by-street, you may see him in the square—
But when a crime’s discovered, then Macavity’s not there!

He’s outwardly respectable. (They say he cheats at cards.)
And his footprints are not found in any file of Scotland Yard’s.
And when the larder’s looted, or the jewel-case is rifled,
Or when the milk is missing, or another Peke’s been stifled,
Or the greenhouse glass is broken, and the trellis past repair—
Ay, there’s the wonder of the thing! Macavity’s not there!

And when the Foreign Office finds a Treaty’s gone astray,
Or the Admiralty lose some plans and drawings by the way,
There may be a scap of paper in the hall or on the stair—
But it’s useless of investigate—Macavity’s not there!
And when the loss has been disclosed, the Secret Service say:
“It must have been Macavity!”—but he’s a mile away.
You’ll be sure to find him resting, or a-licking of his thumbs,
Or engaged in doing complicated long division sums.

Macavity, Macavity, there’s no one like Macacity,
There never was a Cat of such deceitfulness and suavity.
He always has an alibit, or one or two to spare:
And whatever time the deed took place—MACAVITY WASN’T THERE!
And they say that all the Cats whose wicked deeds are widely known
(I might mention Mungojerrie, I might mention Griddlebone)
Are nothing more than agents for the Cat who all the time
Just controls their operations: the Napoleon of Crime!

Buy a year of Every Day Poems, just $5.99 — Read a poem a day, become a better poet. In June we’re exploring the theme Mirror, Mirror.