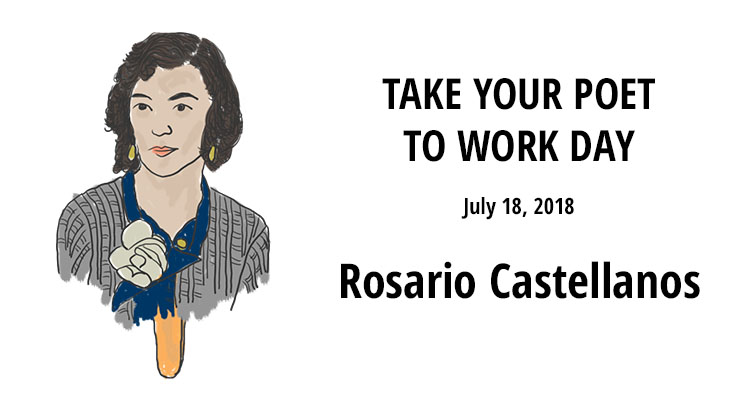 Once featured as the Google Doodle in honor of her 91st birthday, Rosario Castellanos is considered one of the most important literary figures of the 20th century in Mexico. Along with writers such as Rafael Guillén and José Hierro who belonged to the literary movement known as The Generation of ’50, she was heavily influenced by César Vallejo.

Castellanos was born in Mexico City in 1925 in relative affluence, raised on her family’s ranch in Chiapas. When the land reform of President Cárdenas stripped her family of much of its land, they returned to Mexico City. Her parents died shortly thereafter and the fifteen-year-old Castellanos was left on her own.

She was active in a group of Latin American intellectuals, and studied, and later taught, at the National Autonomous University of Mexico. She joined an organization working for literacy among populations in poverty, writing puppet scripts among other things. She went on to write poetry, essays, novels and a play.

Castellanos was appointed Mexico’s ambassador to Israel in 1971, where she died in 1974 as a result of an electrical accident some believe to have been suicide.

Time is too long for life;
For knowledge not enough.
What have we come for, night, heart of night?
Dream that we do not die
And, at times, for a moment, wake.

Get your own Rosario Castellanos – Take Your Poet to Work Printable that you can print, color and cut out for the big day.