Announcing the Poet Laura of Tweetspeak, the United States, the World, and the Moon

Behind (and before) all great poetry communities are their founding visionaries. In the U.S., it is notable that some of the best and most lasting communities have been founded and forwarded by women. Poetry Foundation has its Ruth and its Harriet. Poetry Society of America has its Jessie Belle. Poets and Writers has its Galen. Even the Academy of American Poets has its Marie.

L.L. Barkat was part of the original group of poets who wrote poetry party lines on Twitter in 2009. They created the Tweetspeak website as a place to archive the poems, and the first post went live on October 3, 2009. Independently, Barkat later launched T.S Poetry Press and Every Day Poems, and in 2012 she received the go-ahead from the Tweetspeak co-founders, to bring the poetry site under the auspices of T.S. Poetry Press. She has since been the visionary (and practical) force behind the whole endeavor.

From the start, Tweetspeak has been known for making poetry both a lot more fun and a lot more accessible to anyone who would like to love poetry or to anyone who already loves poetry and has a sense of humor and a wish to experience poetry for life rather than simply as a homework assignment, an academic exercise, or a competition.

In the spirit of this tradition, it has been decided that rather than create a poet laureate (an idea that was recently floated at a Tweetspeak gathering), it seemed far more apt to create something altogether more mirthful, more generative—something which, in classic Tweetspeak style, is both deeply thoughtful in certain subtle aspects and, well, quite obviously zany in others (see chicken-cartoon factor, below).

In consequence, as Tweetspeak approaches its 10th birthday next month, we are excited to announce the inaugural Tweetspeak Poet Laura.

What is the Poet Laura?

The Poet Laura is a one-year appointment by Tweetspeak Poetry. The honoree named as Poet Laura must be able, willing, or impressionable in matters of the following (see list below) and have, at some time in their life—before or after caring about poetry—either been, loved (or admired), worked for, seen, heard tell of, wished they could be named, bumped into, misunderstood, stood in awe of, found themselves seated next to, or dedicated their book to someone named Laura. 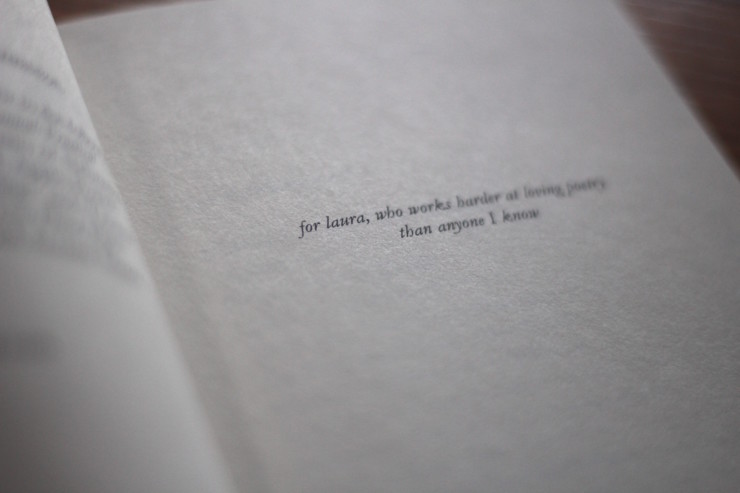 Dedication in How to Read a Poem

10 Matters in Which the Poet Laura Must Be Able, Willing, or Impressionable, So as to Successfully Fulfill Their Role

1. Read a poem every weekday and encourage others to do the same

2. Plant trees, protect trees, or help to plant a trillion trees by scrolling on their phone (to counteract the high paper usage of poets everywhere), and draw attention to or write tree poems, which might be published in a special Poet Laura volume, eventually

3. Participate in one to five of Tweetspeak’s illustrious public days and be honored with becoming part of our Take Your Poet to Work Day collection. Bonus: celebrate Poetic Earth Month! 5. Embrace and promote the 5 Vital Approaches to Poetry for Life

6. Drink tea and write tea poems, which might be published in a special Poet Laura volume, eventually

7. Eat chocolate (preferably fair trade) and write chocolate poems, which might be published in a special Poet Laura volume, eventually

8. Accept any and all opportunities to be on The Late Show With Stephen Colbert, in The New York Times, or have their poetry appear either in Times Square or be painted on a local chicken coop 9. Write, draw attention to, explore the history of, or leave on bulletin boards—poems about Lauras

10. Advise future travelers to the moon, regarding poems that should be placed in strategic areas of both the dark and light sides of the moon. And, if unwilling to personally travel to the moon if so invited, the Poet Laura must be willing to at least part with one of their poems for delivery to the moon, where the poem will, in perpetuity, be read by no one, but will, in any case, shine down on the earth for aeons to come. 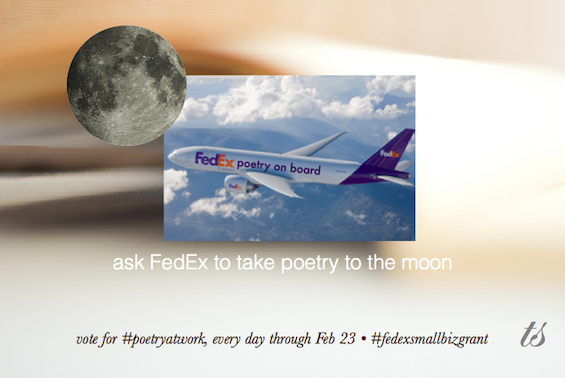 Announcing the Official 2019-2020 Poet Laura of Tweetspeak, the United States, the World, and the Moon We are honored and delighted to welcome Tania Runyan as the first official Tweetspeak Poet Laura. Her role will begin on our 10th birthday—October 3rd.

Tania is a former English teacher and college admissions coach, as well as the author of the poetry collections What Will Soon Take Place, Second Sky, A Thousand Vessels, Simple Weight, and Delicious Air, which was awarded Book of the Year by the Conference on Christianity and Literature in 2007. Her delightful and accessible guides, How to Read a Poem, How to Write a Poem, and How to Write a College Application Essay are taught in schools across the country. Her poems have appeared in many publications, including Poetry, Image, Atlanta Review, Indiana Review, Southern Poetry Review, and the anthology In a Fine Frenzy: Poets Respond to Shakespeare. She was awarded an NEA Literature Fellowship in 2011. It is also rumored that she knows a few chickens to whom she can read poetry. Use the hashtag #poetLaura and #TSPpoetLaura, and give us an @tspoetry, so we can enjoy seeing (and sometimes sharing) your Poet Laura activity at home, school, work, in transport, or in the public square. And for extra fun, use the official Poet Laura emblem in your photos (or on your website, in your emails, on your stationery, wherever you like).