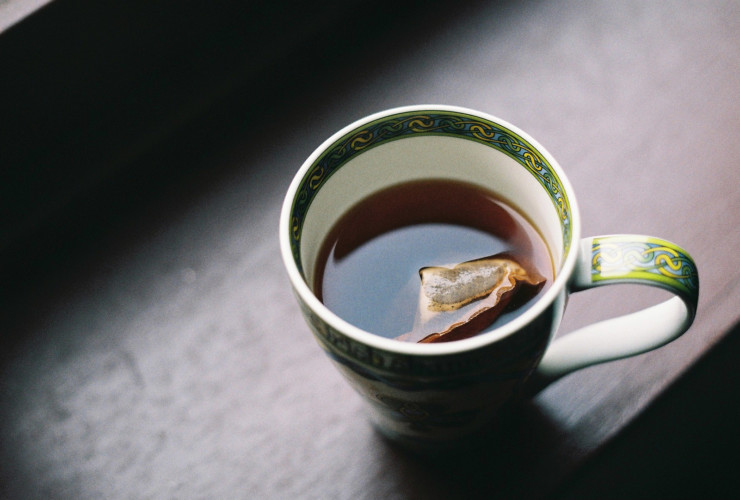 I thought I was going to the Tupelo Honey Teas Cafe for a quick and tasty lunch. Turns out I was just in time for a release party.

It wasn’t a book release, or an album release, or a convict-who’s-served-his-time release. It was the release party for Nebby Chai, the newest of Tupelo Honey Tea’s Pittsburgh-specific blends.

Since 2007, Tupelo Honey Teas has been selling organic, fairly traded teas online, as well as supplying some Pittsburgh-area coffee shops with custom tea blends. Since last November, the shop has had a brick-and-mortar location too—a cafe in the borough of Millvale, which describes itself as “a rural town in an urban setting.”

Tupelo Honey Teas Cafe might be Pittsburgh’s newest tea-centric hangout, but it’s also probably the most quintessentially Pittsburgh. They have four special “Yinzer” blends to honor the steel city. (A Yinzer is a Pittsburgher, after the Western Pennsylvania habit of saying “yinz” for the plural form of you. “Are yinz goin’ to the Stillers game?”) Black and Gold tea celebrates the Steelers. The Jagoff is black tea plus chili pepper flakes, to characterize another local slang term—an inept, irritating person (yet, I would argue, one that you can’t help feeling a little affection for if you know him personally). And Millvale Breakfast is bold and slightly sweet, with lavender, inspired by a poem Millvale residents wrote about their neighborhood.

I had run an errand that morning, then taken a walk in the woods, and it was nearing lunchtime, so I took a slight detour off Route 28 to visit the cafe, which serves vegetarian and vegan fare, locally sourced as much as possible (and sometimes unusual seasonal items, like Marshmallow Peeps Scones). So while I was ordering my iced chai (tastes like ice cream) and chickpea salad sandwich (feels like tuna salad, tastes a little like chicken/chickpea salad), in walked Pittsburgh personality Rick Sebak, making appearances to boost his Kickstarter campaign to fund six public TV episodes on various aspects of Pittsburgh. The name of the series is “Nebby.”

Nebby is Pittsburghese for nosy, nib-nosed, overly curious. Everyone has at least one nebby relative. And Rick Sebak is the ambassador for nebby in the good way.

The release party was for Tupelo Honey’s newest ‘Burgh-specific tea, created in honor of Sebak: Nebby Chai. “Chai with a BIG nose and all the gossip,” the label says. The woman on the label was drawn by chef Pam, a caricature of her grandmother. Its ingredients: nilgiri (a black tea), rooibos, cardamom, ginger, cinnamon, chip, orange peel, black pepper, green pepper, pink pepper and orange flavoring, all organically grown.

Sebak divided his time between the tea shop and the Millvale Public Library, which is next door and also accessible by a door they cut between themselves when the tea shop moved. The library had ordered a large not-vegan cake for the occasion. (I got nebby in a silent way about what poetry they have on their shelves. About a dozen volumes: Emily Dickinson, Robert Frost, Mark Doty, Jewel, Mary Karr’s misfiled memoir Cherry, Sylvia Plath, Vijay Seshadri, Shel Silverstein, and a few Pittsburghers’ self-published works, one of which begins with this epigraph: “‘God makes the pizza, I just deliver it.’—Frankie Capri, Pittsburgh lounge singer extraordinaire.”)

Lots of locals and regulars came in while I was there, including the host of the website and podcast “Ya Jagoff,” a perfectly nice fellow who stopped in to pick up some vegan fare for a family member visiting from out of town.

There’s seating for maybe 20, and an outlet at every table. The shop also stocks tea-specific coloring books, colored pencils and tea-scented erasers, not for sale but for passing the time.

I finished my lunch, opened my computer and worked for a while. When I left, I took home a pouch of Nebby Chai. “You have to drink it with milk or the orange doesn’t come through,” the gal behind the counter recommended. She was right. It tasted strong and good, maybe overly assertive in the beginning, like a tea that might try to pry some secrets out of me. But I warmed up to it.