The Shakespeare Files: an occasional feature of annotations and exclamations on the poetry of William Shakespeare 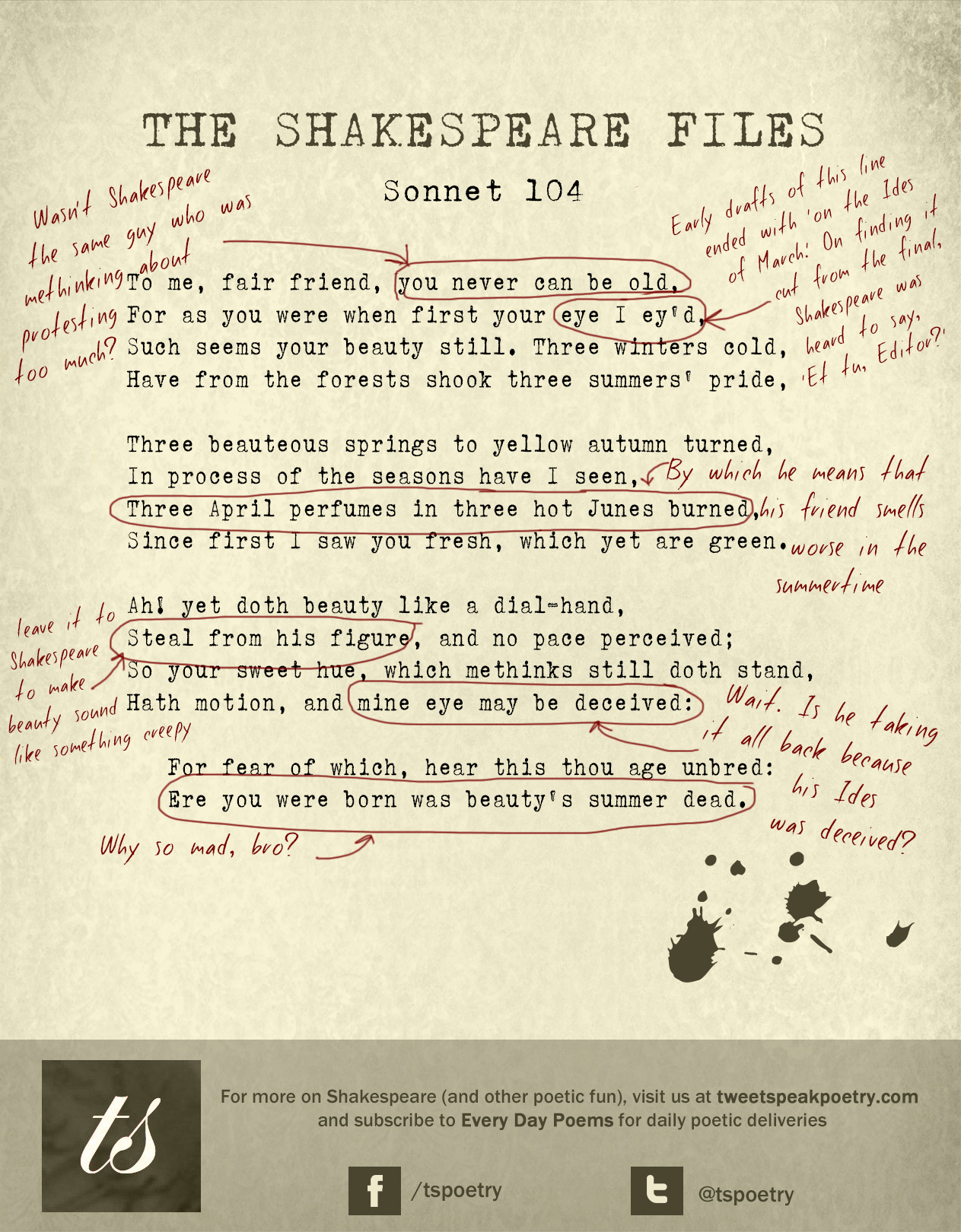 To me, fair friend, you never can be old,
For as you were, when first your eye I ey’d,
Such seems your beauty still. Three winters cold
Have from the forests shook three summers’ pride,

Three beauteous springs to yellow autumn turn’d
In process of the seasons have I seen,
Three April perfumes in three hot Junes burn’d,
Since first I saw you fresh, which yet are green.

Ah! yet doth beauty, like a dial-hand,
Steal from his figure and no pace perceiv’d;
So your sweet hue, which methinks still doth stand,
Hath motion and mine eye may be deceiv’d:

For fear of which, hear this, thou age unbred;
Ere you were born, was beauty’s summer dead.

William Shakespeare did not, of course, tack on a reference to the Ides of March to milk the bit of his “eye I ey’d” a little further. Some of us, however, are not so proud we cannot do so. The Ides of March refers to the date of March 15 on the Roman calendar, which had religious significance and is also considered the date of the assassination of emperor Julius Caesar.

In Shakespeare’s play by the same name (by which I mean Julius Caesar, not a play entitled The Ides of March, though surely that would make a brilliant show as well), Caesar is warned by a soothsayer early on to “beware the Ides of March.” There would be no avoiding his assassination, however. As is being stabbed to death, he sees his good friend Marcus Brutus among those bringing about his untimely end. In response to this betrayal, Caesar manages to blurt out, “Et tu, Brute?” a phrase that has since become the go-to maxim of the betrayed.

It is possible, perhaps, that in the time since Shakespeare first wrote those words for a dying emperor, that a writer or two has uttered them at an editor between metaphorical last gasps for breath, but we have no reason to believe William Shakespeare accused his editor (if he even had one) of killing his darlings like so many Caesars, except that it amuses us to imagine it so.

Photo by Seyed Mostafa Zamani, Creative Commons license via Flickr. Sonnet by William Shakespeare. Post and annotations by Will Willingham.

Browse the Shakespeare sonnets library (all 154!)

Want to learn the secrets of reading a poem (and loving it)?

Try How to Read a Poem by poet and NEA fellow Tania Runyan.