We started our celebration five years ago with Sara Teasdale, Pablo Neruda, T. S. Eliot, Rumi, Edgar Allan Poe, and the reclusive Emily Dickinson (for folks who work at home).

We even released a full collection, The Haiku Masters: Matsuo Basho, Yosa Buson, and Kobayashi Issa.

This year, we start off our new releases with Argentine poet and author Jorge Luis Borges. 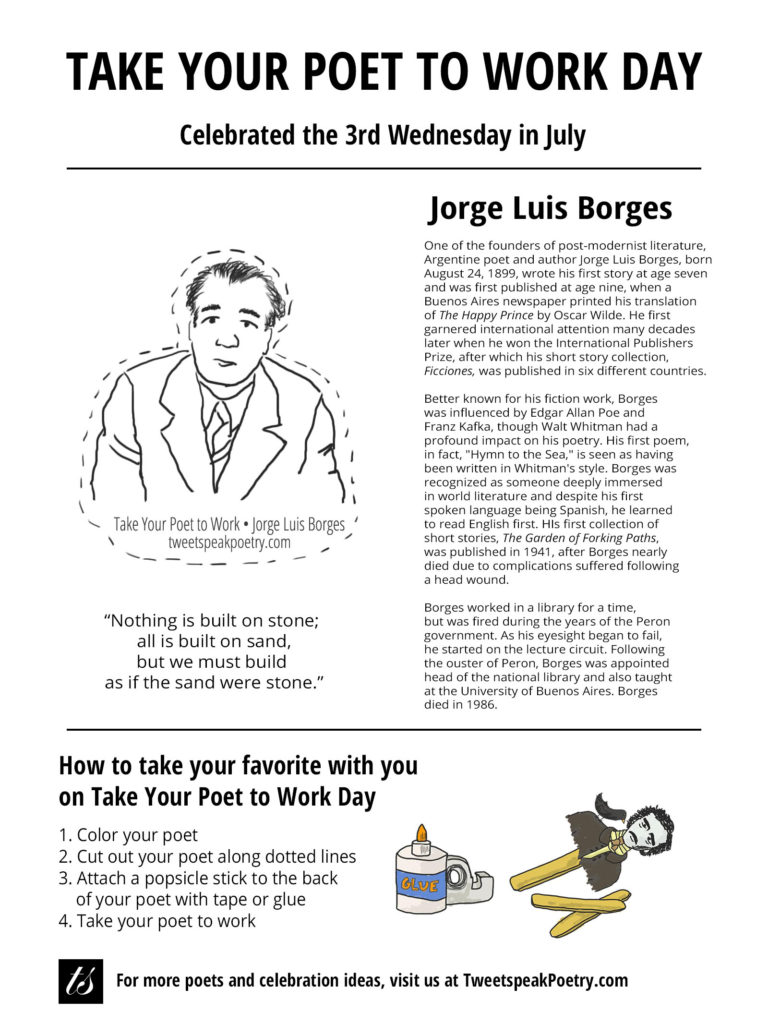 Get your own Jorge Luis Borges Take Your Poet to Work Day Printable that you can print, color and cut out for the big day.

One of the founders of post-modernist literature, Argentine poet and author Jorge Luis Borges, born August 24, 1899, wrote his first story at age seven and was first published at age nine, when a Buenos Aires newspaper printed his translation of The Happy Prince by Oscar Wilde. He first garnered international attention many decades later when he won the International Publishers Prize, after which his short story collection, Ficciones, was published in six different countries.

Better known for his fiction work, Borges was influenced by Edgar Allan Poe and Franz Kafka, though Walt Whitman had a profound impact on his poetry. His first poem, in fact, “Hymn to the Sea,” is seen as having been written in Whitman’s style. Borges was recognized as someone deeply immersed in world literature and despite his first spoken language being Spanish, he learned to read English first. HIs first collection of short stories, The Garden of Forking Paths, was published in 1941, after Borges nearly died due to complications suffered following a head wound.

Borges worked in a library for a time, but was fired during the years of the Peron government. As his eyesight began to fail, he started on the lecture circuit. Following the ouster of Peron, Borges was appointed head of the national library and also taught at the University of Buenos Aires. Borges died in 1986.

Excerpt from “A Patio”

Tonight, the moon, bright circle,
fails to dominate space.
Patio, channel of sky.
The patio is the slope
down which sky flows into the house.

I used to be a claims adjuster, helping people and insurance companies make sense of loss. Now, I train other folks with ladders and tape measures to go and do likewise. Sometimes, when I’m not scaling small buildings or crunching numbers with my bare hands, I read Keats upside down. My first novel, Adjustments, is available now.