Because you can never have too many poets in your lunch box (or your desk drawer), we have a new collection of poets to release this year, including the Bard of Avon William Shakespeare,  beloved poet Maya Angelou, iconic American poet Robert Frost,  Russian poet Anna Akhmatova,  and Polish poet Wisława Szymborska. Today we round out the 2015 Take Your Poet to Work Day poet collection with America’s poet, Walt Whitman. 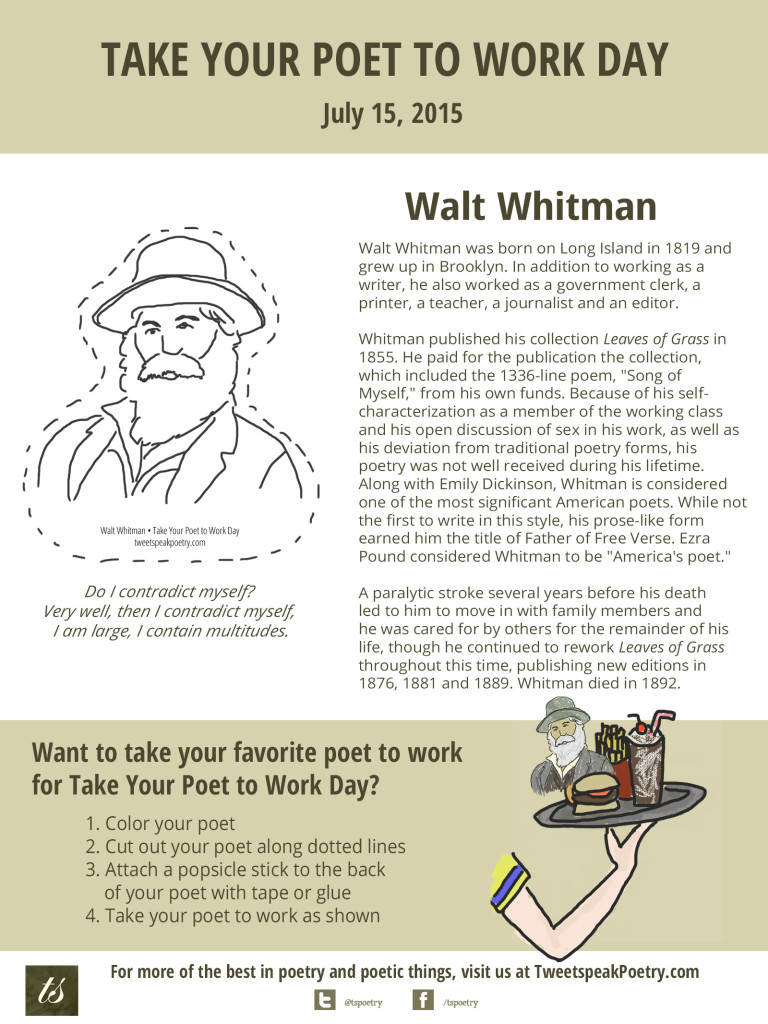 Get your own downloadable version of Take Your Poet to Work Day Walt Whitman that you can print, color and cut out for the big day.

Walt Whitman was born on Long Island in 1819 and grew up in Brooklyn. In addition to working as a writer, he also worked as a government clerk, a printer, a teacher, a journalist and an editor.

Whitman published his collection Leaves of Grass in 1855. He paid for the publication the collection, which included the 1336-line poem, “Song of Myself, ” from his own funds. Because of his self-characterization as a member of the working class and his open discussion of sex in his work, as well as his deviation from traditional poetry forms, his poetry was not well received during his lifetime. Along with Emily Dickinson, Whitman is considered one of the most significant American poets. While not the first to write in this style, his prose-like form earned him the title of Father of Free Verse. Ezra Pound considered Whitman to be “America’s poet.”

A paralytic stroke several years before his death led to him to move in with family members and he was cared for by others for the remainder of his life, though he continued to rework Leaves of Grass throughout this time, publishing new editions in 1876, 1881 and 1889. Whitman died in 1892.

O Me! O Life!
Oh me! Oh life! of the questions of these recurring,
Of the endless trains of the faithless, of cities fill’d with the foolish,
Of myself forever reproaching myself, (for who more foolish than I, and who more faithless?)
Of eyes that vainly crave the light, of the objects mean, of the struggle ever renew’d,
Of the poor results of all, of the plodding and sordid crowds I see around me,
Of the empty and useless years of the rest, with the rest me intertwined,
The question, O me! so sad, recurring—What good amid these, O me, O life?

That you are here—that life exists and identity,
That the powerful play goes on, and you may contribute a verse.