Take Your Poet to Work Day is coming July 15

Because you can never have too many poets in your lunch box (or your desk drawer), we have a new collection of poets to release this year, beginning with the Bard of Avon, William Shakespeare. 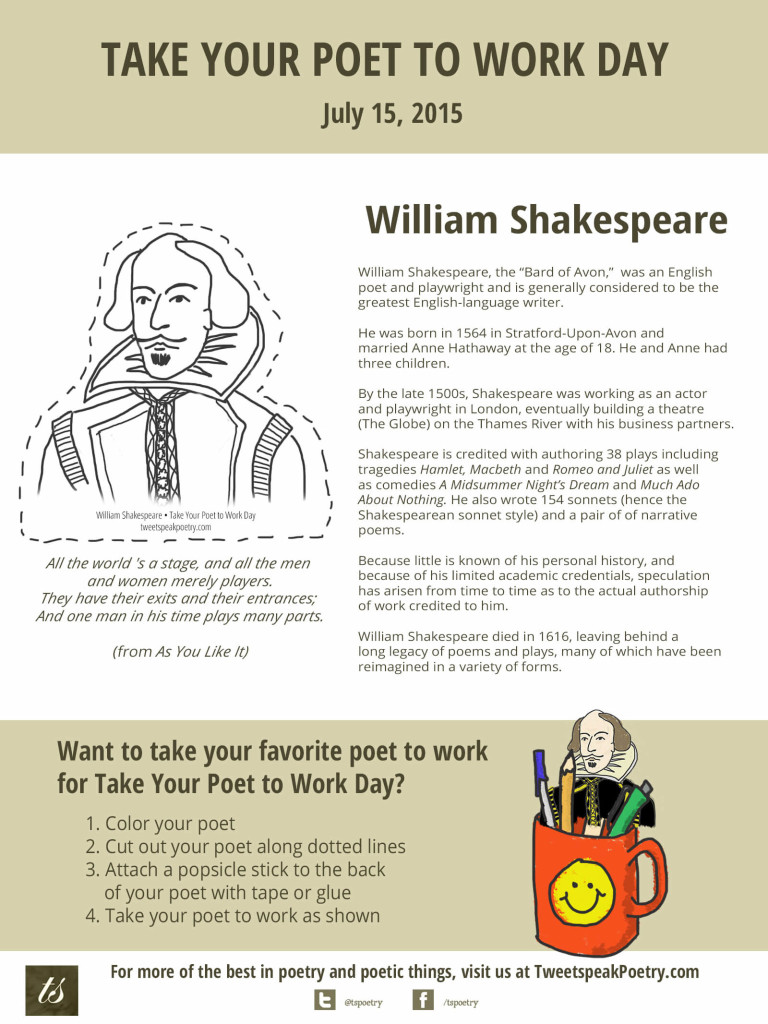 Get your own downloadable version of Take Your Poet to Work Day William Shakespeare Printable that you can print, color and cut out for the big day.

William Shakespeare, the “Bard of Avon,” was an English poet and playwright and is generally considered to be the greatest English-language writer. He was born in 1564 in Stratford-Upon-Avon and married Anne Hathaway at the age of 18. He and Anne had three children.

By the late 1500s, Shakespeare was working as an actor and playwright in London, eventually building a theatre (The Globe) on the Thames River with his business partners.

Shakespeare is credited with authoring 38 plays including tragedies Hamlet, Macbeth and Romeo and Juliet as well as comedies A Midsummer Night’s Dream and Much Ado About Nothing. He also wrote 154 sonnets (hence the Shakespearean sonnet style) and a pair of of narrative poems. Because little is known of his personal history, and because of his limited academic credentials, speculation has arisen from time to time as to the actual authorship of work credited to him.

William Shakespeare died in 1616, leaving behind a long legacy of poems and plays, many of which have been reimagined in a variety of forms.

Sonnet 130: My mistress’ eyes are nothing like the sun

My mistress’ eyes are nothing like the sun;
Coral is far more red than her lips’ red;
If snow be white, why then her breasts are dun;
If hairs be wires, black wires grow on her head.
I have seen roses damasked, red and white,
But no such roses see I in her cheeks;
And in some perfumes is there more delight
Than in the breath that from my mistress reeks.
I love to hear her speak, yet well I know
That music hath a far more pleasing sound;
I grant I never saw a goddess go;
My mistress, when she walks, treads on the ground.
And yet, by heaven, I think my love as rare
As any she belied with false compare.

Sonnet 33: Full many a glorious morning have I seen

Full many a glorious morning have I seen
Flatter the mountain-tops with sovereign eye,
Kissing with golden face the meadows green,
Gilding pale streams with heavenly alchemy;
Anon permit the basest clouds to ride
With ugly rack on his celestial face
And from the forlorn world his visage hide,
Stealing unseen to west with this disgrace.
Even so my sun one early morn did shine
With all-triumphant splendour on my brow;
But out, alack! he was but one hour mine;
The region cloud hath mask’d him from me now.
Yet him for this my love no whit disdaineth;
Suns of the world may stain when heaven’s sun staineth.