A Modernist Classic by Jean Toomer

Jean Toomer (1894-1967) was a writer bundled with a host of seeming contradictions. He was heralded as part of the Harlem Renaissance in the 1920s, but he never wanted to be considered a Black writer, preferring to be called an American writer. Born Nathan Pinchback Toomer, he changed his name at least twice; his maternal grandfather called him Eugene after his father (also a Nathan) abandoned the family. When he began his writing career and for 20 years after, he used the name “Jean Toomer,” changing it again to Nathan Jean Toomer.

He wrote movingly of Black people’s lives, yet both of his parents were of mixed race. His mother’s family members were free before the Civil War; his father was born into slavery but raised by his white grandfather. Toomer married twice; both wives were white. He seems never to have called himself either Black or white, saying that he was simply an American. He wrote poetry, one work of fiction, and several nonfiction books, he’s best known and remembered for the fiction.

Cane was published in 1923 and immediately recognized as a great modernist achievement. It appears to be a collection of several short stories, separated by poems and short sketches. The short stories concern several women–—Karintha, Becky, Carma, Fern, Esther, Louisa, Avey, Muriel, and Bona. A long story, entitled “Kabnis,” concludes the work. The settings move from rural and small-town Georgia to Northern cities. Only gradually does the reader come to understand that all of these stories, poems, and sketches are connected. Reading Cane is like reading William Faulkner, the modernist author with whom Toomer is often favorably compared. (Faulkner and Toomer were roughly contemporaries.) This is a work about Black women, Black men, the post-Civil War era in the South, and the great migration to the North, which was fully underway when Toomer began writing.

Toomer said he was influenced by Sherwood Anderson’s Winesburg, Ohio (also a cycle of short stories) and The Waste Land by T.S. Eliot. To read Cane is to experience a full range of emotions—among them wonder, surprise, understanding, disgust, anger, love, and affection. Through the short stories, poems, and sketches, the author is telling a story about how individual people experienced some of the most tumultuous events in their history. This history is familiar to many of us; how these individuals experienced is not. 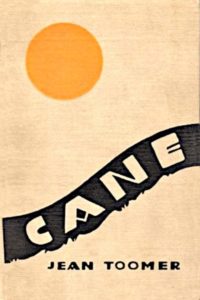 Within this black hive to-night
There swarm a million bees;
Bees passing in and out the moon,
Bees escaping out the moon,
Bees returning through the moon,
Silver bees intently buzzing,
Silver honey dripping from the swarm of bees.
Earth is a waxen cell of the world comb,
And I, a drone,
Lying on my back,
Lipping honey,
Getting drunk with silver honey,
Wish that I might fly out past the moon
And curl forever in some far-off farmyard flower.

A number of books have been published that provide more information, research, and literary study about Toomer and his work. The Collected Poems of Jean Toomer (1988) is the only volume of his poetry. Invisible Darkness: Jean Toomer and Nella Larson (1993) is a study of two figures of the Harlem Renaissance. Jean Toomer: Race, Repression, and Revolution by Barbara Foley (2014) examines his interest in class struggle. Jean Toomer: Selected Essays and Literary Criticism was published in 1996. Numerous editions of Cane have been published, including teaching guides and literary analyses.

Cane is almost 100 years old. It’s known among academics, but it deserves to have a wider readership beyond being considered a modernist classic. The stories often startle; they use language that would rarely be used today. But they open a window into a time and how people lived in that time and through that time, how they were shaped and shaped themselves.