Before he was the winner for the Nobel Prize for Literature, before he was recognized for some of the most innovative and remarkable poetry of the 20th century, before The Hollow Men became one of the most recognizable poems in modern times, he was Tom Eliot, young Tom Eliot.

Thomas Stearnes Eliot was the youngest of six children, born in 1888 when his parents were 45. His siblings were considerably older than Tom. His was an upper class family in St. Louis, where his father was a vice president of a major brick manufacturer and his grandfather the founder of Washington University in St. Louis. His Unitarian family came from New England, and he was related to John Greenleaf Whittier, James Russell Lowell, Henry Melville, Nathaniel Hawthorne, Henry Adams, John Adams and John Quincy Adams. We’re more familiar with the latter half of Eliot’s career, from the time he was established as a poet of international renown, his Nobel Prize, and the poetry that in many ways helped to define Modernism in literary history. But before he was the famous poet, he was the boy, the young man at Harvard, and the expatriate in England.

In Young Eliot: From St. Louis to The Waste Land, Robert Crawford explores the early Eliot in depth, covering the period from his birth to the publication of The Waste Land in 1922. Making use of letters, articles, other published resources and his own understandings of Eliot’s poems and poetry, Crawford draws a wonderfully three-dimensional portrait of the poet, including his growth and development, his flaws and failings, the relatively long incubation period for his poetry to become recognized, and the critical role played by how well Eliot fit into the literary circles of London from 1915 to 1922.

Crawford explains the huge impact that the discovery of the French Symbolist poets made on Eliot while a student at Harvard. His introduction was The Symbolist Movement in Literature by Arthur Symons (1899) and especially the poet Jules Laforgue (1860-1887), whose poetry is still in print. After graduation, Eliot spent a year studying in Paris. Eventually, he was accepted into Merton College, Oxford, for a year of study, but first went to the University of Marburg in Germany for a summer study session, which is where he was when World War I began in 1914. He was eventually allowed to leave, and reached England through neutral Holland. England was where Eliot made his home from that time onward; the following year, he met Vivien (often spelled Vivienne) Haigh-Wood, and three months later they married. The marriage was troubled from the outset, with Vivien’s chronic illnesses and her affair with Bertrand Russell causing major stresses and fractures. Disliked by his literary friends, nonetheless Vivien, Crawford tells us, consistently championed Eliot’s poetry and what she considered her husband’s genius.

The circles the Eliots moved within the London literary scene included Ezra Pound (an early promoter of Eliot’s poetry), Bertrand Russell, Leonard and Virginia Woolf, and Edith Sitwell and  her brother Osbert, among many others. Eliot had a serious knack for networking, and he utilized it to the fullest. Pound, for example, convinced the editor of Poetry Magazine in Chicago to publish The Love Song of J. Alfred Prufrock, who positioned it in the back of the magazine because he didn’t like it.

Crawford details all of the activities Eliot was involved in: literary journalism (articles and book reviews), his work at Lloyd’s Bank (which he found rather soothing), editing literary journals, and helping to promote other poets and writers like James Joyce. Eliot had a huge capacity for work. And he details the various influences leading up to the creation and publication of The Waste Land. 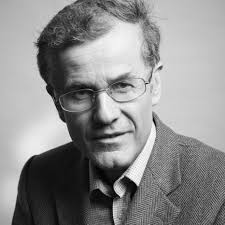 The author brings a wealth of research and understanding to the subject of Eliot. He is the Professor Modern Scottish Literature at the University of St. Andrews, and a fellow of both the Royal Society of Edinburgh and the British Academy. He’s the author of The Savage and the City in the Work of T.S. Eliot (1991), and well as several works on Scottish literature, including Bannockburns: Scottish Independence and Literary Imagination 1314-2014, The Bard: Robert Burns, A Biography (2009), and Scotland’s Books: A History of Scottish Literature (2009). He is also a published poet, with six poetry collections, including Talkies (1992), Masculinity (1996), Spirit Machines (1999), Full Volume (2008), The Tip of My Tongue (2011), and Testament (2014).

What emerges from Young Eliot is a distinctly human figure, a man of enormous intellect and talent whose hard work and innovative poetry eventually would catapult him into being one of the literary icons of the 20th century. In an exhaustively researched and well-written work, Crawford tells us where that all came from.

Related: Finding Eliot in St. Louis, my thoughts on the first part of the biography.