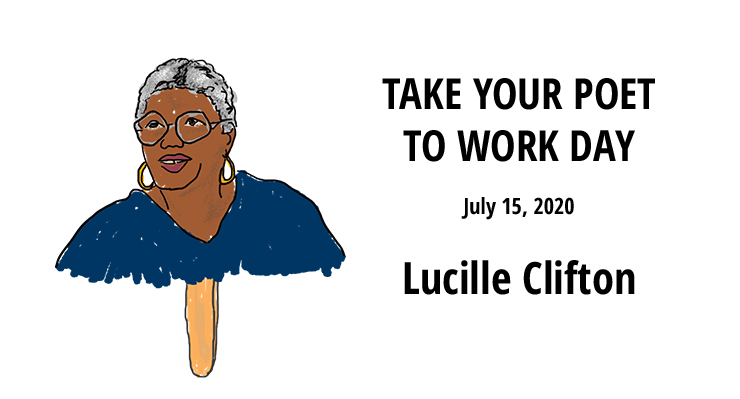 Take Your Poet to Work Day is coming!

We celebrate Take Your Poet to Work Day on the 3rd Wednesday in July. In 2020, that’s July 15. To help you play and celebrate with us, release new poets each week in a compact, convenient format you can tuck in your pocket, tool belt, or lunchbox.

We started our celebration seven years ago, and have been adding poets ever since. This year, you can bring Lucille Clifton, Countee Cullen, and Tania Runyan (or only living Take Your Poet to Work poet, and this year’s official Tweetspeak Poet Laura).

You can choose your poet from our full collection: Download a printable version of Take Your Poet to Work: Lucille Clifton

Lucille Clifton, an American poet, was born Thelma Lucille Sayles in New York in 1936. She studied at Howard University and SUNY at Fredonia. Before entering academia herself, she worked as a clerk in the New York State’s Employment Division and as a literary assistant in the Office of Education in Washington, D.C. She married philosophy professor and sculptor Fred James Clifton, and they had six children together. She gained notoriety as a poet when a friend, writer Ishmael Reed, showed her work to Langston Hughes. Hughes included some of her poems in his 1970 anthology, The Poetry of the Negro. She would go on to receive awards for her poetry, including winning the Juniper Prize in 1980 for Two-Headed Woman, which also was nominated for the Pulitzer. Two of her collections were Pulitzer finalists, making Clifton the first to have two finalists the same year: Good Woman: Poems and a Memoir, 1969-1980 and Next: New Poems. She won the Ruth Lilly Prize in 2007.

Clifton’s poetry is economical, what Robin Becker referred to as “poetics of understatement.” Notable for their lack of punctuation and capitalization, Clifton’s poems made powerful statements in their disarming simplicity. She wrote often on the black experience and on womanhood, employing poems such as homage to my hips and homage to my hair to celebrate them both while also a means to reframing the way black bodies and black womanhood were understood.

Lucille Clifton served as Poet Laureate of Maryland from 1974 to 1985, and had a long academic career at Coppin State College, Columbia University, George Washington University, University of California at Santa Cruz, St. Mary’s College of Maryland and Dartmouth College.