Sunday marks the 100th anniversary of the end of World War I. The war that was supposed to be over by Christmas (of 1914) lasted four and a half years. Ten million military personnel and almost 7 million civilians died. The Habsburg, Romanov, and Hohenzollern empires ended. The Russian Revolution started, with millions more killed over the next four to five years. Even the victorious nations in Europe faced dire financial conditions, broad disillusionment, and the loss of a generation because of the war.

Poetry changed as well. People’s understanding of the war was partially shaped by poetry, and the patriotic poems of the first year of war, like Rupert Brooke’s “The Soldier” and Alan Seeger’s “I Have a Rendezvous with Death,” gradually gave way to poems like Wilfred Owen’s “Anthem for Doomed Youth.”

The forms of poetry also changed during the war. While most war poems followed traditional and formal forms, it was in 1915 that Poetry Magazine published T.S. Eliot’s “The Love Song of J. Alfred Prufrock,” considered by many to have inaugurated the birth of modernism in poetry. It was perhaps no coincidence that Eliot was a transplanted American living in wartime London when he wrote the poem.

Because the last four years have marked the centennial of the war, an abundance of books about the war and the poetry of the war have been published. We’ve reviewed many of them here at Tweetspeak Poetry. Here are some of the best.

Anthem for Doomed Youth: Twelve Soldier Poets of the First World War by Jon Stallworthy summarizes the lives of 12 leading war poets in photographs, poems, and text. It’s an engaging overview of the leading British poets of the war. Tim Kendall’s The Poetry of World War I—An Anthology is exactly that, a well-rounded collection of the work of British poets. And Up the Line to Death: The War Poets 1914-1918 by Brian Gardner is another fine compilation and anthology. 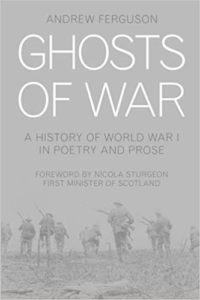 Looking to give some Scottish balance to the preponderance of English poets, writer Andrew Ferguson published Ghosts of War: A History of World War I in Poetry and Prose. The book tells the stories of the major battles, summarizing the history and using examples from poems and nonfiction accounts. The poet with the most poems reprinted in the volume is Ewart Alan Mackintosh (1893-1917), and Scottish First Minister Nicola Sturgeon provides the introduction.

Three books take World War I poetry, and the war itself, into a deeper understanding. Mary Egremont’s Some Desperate Glory: The First World War the Poets Knew details the war as experienced by the men who wrote the poetry. The poetry most read by the soldiers themselves was A Shropshire Lad by A.E. Housman. And writer Peter Parker explores A Shropshire Lad in scholarly depth and research in Housman Country: Into the Heart of England.

One of the most acclaimed memoirs of the war, published a decade after the war’s end, was Edmund Blunden’s Undertones of War, which includes not only a day-to-day account of his life at the Western Front but also all of the war poems he wrote. When it was published in 1928, the publisher believed it wouldn’t be popular and printed only a limited number of copies. The book went through seven editions in its first year, and it has been called a masterpiece of the war memoir. Blunden pulls no punches; the brutality, horror, and stupidity of the war can be found in both the memoir and the poems. While the British poets dominate the field of war poets, other countries’ poets were equally active, just not as well known. Geert Buelens tells the stories of poetry in all the warring countries in Everything to Nothing: The Poetry of the Great War, Revolution, and the Transformation of Europe. Irishman Francis Ledwidge gained the approbation of his fellow citizens by fighting for the British in the war. The most famous poem of the war, “In Flanders Fields,” was written by a Canadian. The second-most famous poem of the war, Seeger’s “I Have a Rendezvous with Death” (noted above), was written by an American who enlisted with the French Foreign Legion.

The war’s centennial has inspired more than the publications of books. London’s Imperial War Museum opened the permanent World War I Galleries, which cover everything from a diary of the German invasion of Belgium through the signing of the surrender treaty on Armistice Day—and provide the opportunity to visit a trench at the front (minus the mud and the lice). And the dramatic public art installation of Blood Swept Lands and Seas of Red from July through November of 2014 in the Tower of London moat may rank as one of the best war memorials of all time. Almost 900,000 ceramic poppies eventually were placed in the moat, one for each British and colonial casualty of the war. You can see pictures of the installation and even track where a lot of the poppies ended up (including one at my home in St. Louis).

World War I, called The Great War in its own time, was believed to be the war to end all wars. It was not to be. It brought convulsive change to much of the world. It was chronicled by poetry to a remarkable extent, and it changed poetry to an equally remarkable extent. Poetry has experienced no war like it, before or since.

Photo by Dominic Alves, Creative Commons, via Flickr. Post by Glynn Young, author of the novels Dancing Priest, A Light Shining, Dancing King, and the newly published Dancing Prophet, and Poetry at Work.