Francis Ledwidge (1887-1917) has not been one of the better known poets of World War I. At first glance, this seems puzzling.

He saw action at Gallipoli, in the Balkans, and in the trenches in France and Flanders. His first collection of poetry was published in 1914, entitled Songs of the Fields. A second was being prepared for publication when he was killed during the Third Battle of Ypres (also known as Passchendaele) on July 31, 1917, just shy of his 30th birthday. He was known, rightly or wrongly, as the “peasant poet,” which did him some injustice but which also helped to sell his poems and his poetry book. He didn’t come from the British upper or upper middle class, like so many of the war poets, but his lack of reputation wasn’t a class thing.

Instead, it was a political thing. Ledwidge was Irish, and an Irishman who volunteered for the British Army. He was also an Irish Nationalist, but not like his more radical countrymen. He believed that fighting for Britain against the Germans would help Ireland gain independence. The fact that he was Irish didn’t help him or his reputation with the British, and the fact that he fought for the British didn’t help his reputation with the Irish.

What ultimately saved his reputation in his own country was a single poem, written in honor of Thomas MacDonagh, the Irish activist and poet who was one of the leaders of the Easter Rising in 1916 and executed by a British firing squad in May 1916. He shall not hear the bittern cry
In the wild sky, where he is lain,
Nor voices of the sweeter birds
Above the wailing of the rain.

Nor shall he know when loud March blows
Thro’ slanting snows her fanfare shrill,
Blowing to flame the golden cup
Of many an upset daffodil.

But when the Dark Cow leaves the moor,
And pastures poor with greedy weeds,
Perhaps he’ll hear her low at morn
Lifting her horn in pleasant meads.

Ledwidge’s story and poetry were too good to leave in obscurity. In 1972, Alice Curtayne wrote what is still considered an outstanding biography of Ledwidge, simply entitled Francis Ledwidge: A Life of a Poet (it was republished last year for the 100th anniversary of his death). The second collection of his poetry, Songs of Peace, was published, followed by a third and final volume, Last Songs. Decades later, The Complete Poems of Francis Ledwidge was published. 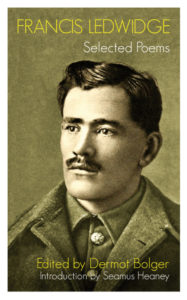 In 2007 (and republished in 2017), Selected Poems of Francis Ledwidge was published, including an introduction and appreciation written by Seamus Heaney and a lengthy discussion by poet Dermot Bolger. No longer is there a cloud over Ledwidge’s reputation. Bolger served as editor of the volume of Heaney’s introduction and Ledwidge’s poems. The 58-page essay on Ledwidge is Bolger’s discussion of how he discovered the poetry, how it dramatically spoke to him, and how his own “search for Ledwidge” became in effect his search for himself.

Ledwidge’s poems are strongly influenced by his understanding of and experience in nature, which might be expected for a man who grew up in rural Ireland and had no college education. But he also writes of war, and lost love, and his poem for MacDonagh speaks to his ardent desire for Irish independence.

Selected Poems of Francis Ledwidge is a fine introduction to a poet who deserves to be better known, and who stands as an example of what can happen when a poet doesn’t follow the expected narrative but instead follows his own heart.

Photo by pbkwee,Creative Commons, via Flickr. Post by Glynn Young, author of the novels Dancing Priest, A Light Shining, and the newly published Dancing King, and Poetry at Work.