Perhaps more than any other conflict, World War I is the most closely associated with poetry. Poets enlisted and wrote from the fields and trenches; poets helped bury their comrades and wrote about it; poets died; and poets survived to write the poetry of the war. And poets and their poetry helped shape especially the British perspective on the war and war in general for a generation.

It was also, perhaps, how war was changing. The American Civil War had signaled the end of the old style of war; World War I turned war into an industrial enterprise, with its advanced weaponry, airplanes, and even chemical gases. World War I also changed what people understood war to be – no longer battles between armies and navies but total war, pitting nation against nation, including the civilian population.

This was a time, too, when newspapers and general interest magazines routinely published poetry, and the public engaged in reading and reciting poetry far more than what we know today. Poetry spoke of the war and to the war in ways that even the best written and most devastating news accounts could not.

The British poets most associated with World War I are Rupert Brooke, Wilfred Owen, Seigfried Sassoon, Isaac Rosenberg, and Robert Graves, all of whom fought and many of whom died. Rudyard Kipling and Thomas Hardy also wrote poetry about the war, Kipling’s in particular changing over time to an anger one might not expect from this writer closely connected to British imperialism (his son died in the war).

And yet the poem that became the most famous of the war was not written by a Briton; it was written by a Canadian doctor, John McCrae, who worked long and terrible hours in field hospitals. Born in 1872, he was a generation older than the typical soldier. He suffered a personal loss when a student and good friend, Lt. Alexis Helmer, was killed during the Second Battle of Ypres, and McCrae led the burial service. For some months afterward, he worked on a poem, trying to express his anguish, his belief, and his patriotism.

Once thing the new technology of war managed to do was tear up the landscape, leaving holes and craters in what had once been farmers’ fields, towns and cities. Virtually nothing managed to grow, except for what most people knew as a weed. It was called by a variety of names – including the red weed, the corn rose, and the red poppy. (Chris McNab has a wonderful description of the flower and how it came to represent the war, along with a mass of war statistics and observations, in The Book of the Poppy, published this year.)

What McCrae noticed was the poppy managed to grow in the most destroyed and ghoulish of landscapes, irrepressible in its ability to overcome the destruction wrought by war. And he wrote a poem that use the poppy as an image. In Flanders fields the poppies blow
Between the crosses, row on row,
That mark our place; and in the sky
The larks, still bravely singing, fly
Scarce heard amid the guns below.

We are the Dead. Short days ago
We lived, felt dawn, saw sunset glow,
Loved and were loved, and now we lie
In Flanders fields.

Take up our quarrel with the foe:
To you from failing hands we throw
The torch; be yours to hold it high.
If ye break faith with us who die
We shall not sleep, though poppies grow
In Flanders fields.

The poem was rejected by several publications but finally published in December 1915 by Punch. It became the poem of the war during the war. It spoke to the people of Britain, its dominions and allies in a profound way. When America joined the war, and American casualties began to roll in, it spoke to Americans as well.

It was an American schoolteacher, Moina Michael, overwhelmed by the poem, who in 1920 convinced the Georgia Department of the American Legion to make the poppy the remembrance flower of the war. Acceptance by the full American Legion at its annual convention followed shortly thereafter. Attending the convention was a Frenchwoman, Anna Guerin, who embraced the idea of a remembrance flower and traveled to Australia, New Zealand, Canada and finally Great Britain to promote the idea.

And thus the Memorial Poppy was born, and endured. John McCrae would not live to see this result of his poem; he died of pneumonia in January 1918.

This year is the 100th anniversary of the start of the war, and visitors can find the poppy everywhere, including 880, 246 ceramic red ones in the moat of the Tower of London. It’s a huge art installation entitled “Blood Swept Lands and Seas of Red.” It’s also the most moving work of art I’ve ever experienced.

The installation is itself a poem, utilizing what looks to be a delicate flower but is actually a persistent if beautiful weed, reminding us of death and the cost of sacrifice, yes, but also standing for hope and for life. 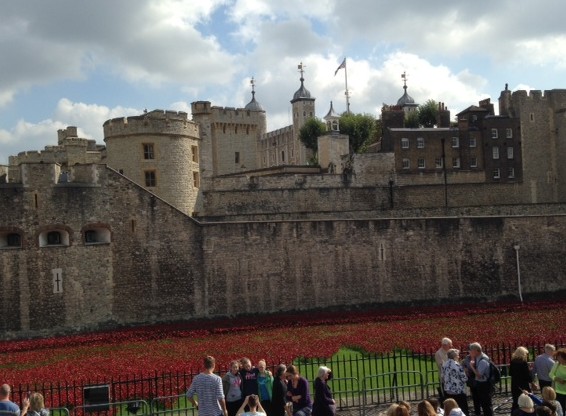 Top photo by Susan Etole. Bottom photo and post by Glynn Young, author of the novels Dancing Priest and A Light Shining,  and Poetry at Work.