In 1896, A.E. Housman (1859-1936) published a poetry collection that might have seemed an unlikely candidate for one of the most popular books of poetry of all time. And yet it was, and is. Pocket editions of A Shropshire Lad were carried into the trenches by British soldiers in World War I. Countless editions were printed from 1896 to well after Housman’s death, and the book is still published today. It was widely read not only in England but also in Canada, Australia, the United States, and many other countries. 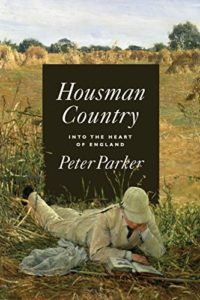 Author Peter Parker explains why in the recently published Housman Country: Into the Heart of England. More than another other book of poetry, more than any other novel, A Shropshire Lad is about England, what it meant, what’s been lost, and what’s endured. It is nostalgic, but it is nostalgia with a bite, what Parker calls “true nostalgia,” the past you can recognize but never regain.

“It is when the Lad is furthest away from his country,” he writes, “looking back at it from exile in London, that he finds it most appealing, and this reflects the nostalgia of not only of Housman himself, obliged to abandon the rural scenes of his youth in order to earn a living in the capital, but of a large swathe of the English population.” That nostalgia is not only English but American and Canadian as well. But it is inherently English, and the collection framed the broad understanding of what England was and what it still is.

Parker also undertakes an extensive investigation of how A Shropshire Lad came to be. Housman wasn’t a Shropshire lad himself; he was actually born and raised next door in Worcestershire. During his school days, he had a distant view of the Shropshire hills from his window, but he never spent much time there. A.E. Housman about the time he wrote “A Shropshire Lad”

The collection was born of Housman’s own experiences, stories he heard while growing up, and even, Parker says, a very long infatuation with a fellow Oxford student and close friend, Moses Jackson, who did not return Housman’s interest. The strains of that infatuation play through A Shropshire Lad, and it may be that sense of rejection and being an “outsider” that also appealed to so many readers.

The work was not written as a collection of war poetry, but it undoubtedly influenced the famous poets of World War I, including Wilfred Owen, Siegfried Sassoon, and Rupert Brooke. But the work became strongly associated with war. “It was the war itself,” Parker says, “that made Housman a war poet, and one of the reasons why is that World War I was the first war fought not by professional soldiers but by volunteers and conscripts, just like those lads from Shropshire.” 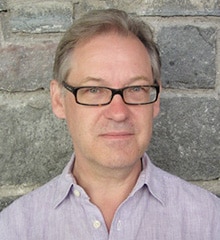 Parker is the author of Ackerley: The Life of J.R. Ackerley (1991); Isherwood: A Life Revealed (2004); The Old Lie: The Great War and the Public School Ethos (2007); and The Last Veteran: Harry Patch and the Legacy of War (2009). He writes about novelists, poets, World War I, and gardening for a wide array of publications, including The Spectator. He lives in London’s East End.

Housman Country is a significant achievement in scholarship. In addition to the narrative, the book includes an extensive bibliography, notes, and a table of contents, as well as the entire text of A Shropshire Lad as an appendix. It’s a moving work, reminding us of how our understanding of a poem or a poetry collection comes to be, and what makes certain poems resonate so deeply within our minds.

Photo by Bob Farrell, Creative Commons, via Flickr. Post by Glynn Young, author of the novels Dancing Priest and A Light Shining, and Poetry at Work.