In his new chapbook A Season in Another World, British poet Matt Duggan takes readers on a journey. The 21 poems in the collection use words as a kind of travel guide, whether it is to look through the window of time, or arrive in Venice and its Island of the Dead, or wander through a dark forest. These are poems steeped in legend, myth, fable, and fairy tale; where else does a dark forest “leak bare light” but in a fairy tale?

Duggan has been previously inspired in his poetry by myths and legends. His 2011 collection Underworld: The Modern Orpheus was a retelling of the legend of the musician and poet who could charm all and also served as one of Jason’s Argonauts on their quest for the golden fleece. The poems of A Season in Another World are less concentrated on one theme or character, but they still display a strong sense of connection with myth.

Polyphemus, for example, was one of the giant Cyclopes that Ulysses and the men of the Odyssey encountered on the island of Sicily. The giant liked to eat men and consumed four of Ulysses’ crew before Ulysses tricked him into drunkenness and then blinded his single eye. Part of the trick involved Ulysses assuming the name of “No Man,” so that when the other Cyclopes asked Polyphemus who had blinded him, the giant replied, “No Man.” They declined to help him and suggested he pray to the gods.

Here’s how Duggan translates the myth.

The Search for Polyphemus Inside a stone shaped like a Trojan ship,
I swam in ripples where apples underneath water
glow like figures in a church window

beside the broken deck; the eye of Polyphemus
dangled from a lemon tree.
If time allows us to remove the tusk inside the tree,
we may rinse the memory of man’s nightmares:
the instruments that harness sanity
like broken berries hanging from a thread.

Inside the eye, they burn mosquito bites off
with the venom of the Gorgons;
feign madness like the King of Ithaki. 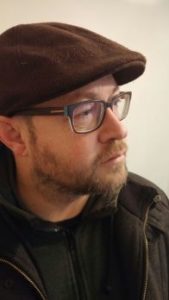 The Gorgons were three monsters with snakes for hair; Medusa is the best known. And the King of Ithaki who feigns madness is Ulysses himself. It’s fascinating how Duggan uses language and images to tell the story and infuse it with a contemporary meaning about sanity and the things we fear.

Duggan was born in Bristol, England, in 1971 and lives there today. His poems have appeared in numerous online and print journals, including Indiana Voice Journal and Ink Sweat and Tears. He started and still hosts a spoken word evening at the Hydra Bookshop in Bristol. His Dystopia 38.10 won the 2015 Erbacce prize for poetry.

We may not want to spend a lifetime in the lands of A Season in Another World, but while we have our tourist visas, we can discover why legends and stories still help us understand our contemporary world.

Poets and Poems: Matt Duggan and “One Million Tiny Cuts”

Photo by Adam Selwood, Creative Commons, via Flickr. Post by Glynn Young, author of Poetry at Work and the novels Dancing Priest, A Light Shining, Dancing King, and the newly published Dancing Prophet.