British poet Matt Duggan uses language and images that are as vivid as they are often jarring. His poems force a focus on the contradictions and non sequiturs of life and culture, fueled sometimes by a cold, discerning eye and sometimes by political anger (Duggan’s the co-editor of the political poetry magazine The Angry Manifesto). Whether he’s writing about dystopia or the Greek myth of Orpheus, he employs sharp, attention-getting images and metaphors.

And so it is with his new collection, One Million Tiny Cuts.

It’s a small collection, comprising only 20 poems. And yet its length is forgotten when one considers the power of the poems. These poems possess an energy that surprises but never disappoints.

He writes of his affinity for Europe, the reality of a world dominated by tweets and emojis, the safety of empty rooms, life in the echo chamber, the need for isolation in a world of constant spotlights, and drinking with Hemingway (he finds a oneness with the author after his “fourteenth sip of absinthe”). This is once again dystopia, the theme of his last collection, Dystopia 38.10.

How did you cope with the first tiny cut?
the milk that drained from the soul.
Did that cut lay inscribed on your back?
how did the mechanism work for you.

Some never reveal their first tiny cut
thin tissue that departed into liquid,
shrugged as a learning curve of emotions
while others build a solid resistance;

killing sorrow before it spreads into their blood
age will always teach us the value
in the cracks that will reappear,

as they do not see the one million tiny cuts
embellished on your back which strengthens resolve,
in a battlefield where you feed on another tiny cut. 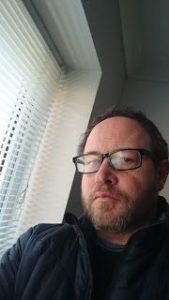 Duggan was born in Bristol, England, in 1971 and lives there today. His poems have appeared in numerous online and print journals, including Indiana Voice Journal and Ink Sweat and Tears. He started and still hosts a spoken word evening at the Hydra Bookshop in Bristol. Dystopia 38.10 won the 2015 Erbacce prize for poetry.

One Million Tiny Cuts is not for the fainthearted. It’s a bold collection, an angry collection, a kind of fist raised at society. Like all fists, it’s also a kind of warning.

Photo by Jenny Downing, Creative Commons, via Flickr. Post by Glynn Young, author of the novels Dancing Priest, A Light Shining, and the newly published Dancing King, and Poetry at Work.