In 1934, T.S. Eliot worked with the producer E. Martin Browne to produce a verse play called The Rock. If the idea of a verse play or verse drama sounds strange, it’s how plays have been written for most of human history. The famous tragedies of ancient Greece are verse plays, as are the plays of William Shakespeare. Eliot and Browne wrote and produced the play, and it was successful enough that they were asked to write one for the Canterbury Festival in 1935.

Eliot chose the murder of Archbishop Thomas Becket by agents of Henry II in 1170 as the play’s subject. He relied heavily on the account of the murder by Edward Grim, a clerk from Cambridge who was at Canterbury Cathedral on the night of December 29 when the murder occurred. Grim’s account of Becket’s death is a short one, included in his biography of St. Thomas published some 10 years after the event. But Grim was there, and it was an eyewitness account. 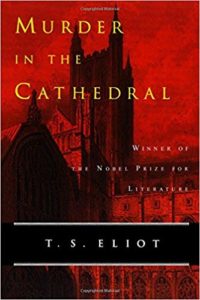 The Eliot-Browne production was entitled Murder in the Cathedral, and it was one of the last original verse plays ever produced for the stage. It was first performed at the Chapter House at Canterbury Cathedral for the festival and then at the Mercury Theatre in London for several months.

The play is divided into three parts — two acts separated by a sermon. Interestingly, Browne asked Eliot to remove part of the text from the script, and Eliot agreed. The removed part became “Burnt Norton,” first published in 1936 and later added to the other three poems of Four Quartets.

The play’s characters include a chorus of local women from Canterbury, three cathedral priests, a herald, Becket, four tempters, four knights, and assorted attendants. The chorus serves the same purpose as the choruses of Greek plays — to warn, predict, and add a sense of drama and tension. The four tempters of Part I seem inspired by the so-called friends in the Old Testament book of Job who give all kinds of advice and reasons for Job’s calamities except the true ones. The unnamed priests play a particular active role in Part II, urging Becket to flee what all believe is his impending doom.

Becket resists the tempters, the priests, and the chorus. Responding to one of the tempters, who is urging Becket to remain in the king’s good graces and restore the good times for all, Becket says this:

We do not know very much of the future
Except that from generation to generation
The same things happen again and again.
Men learn little from others’ experience.
But in the life of one man, never
The same time returns. Sever
The cord, shed the scale. Only
The fool, fixed in his folly, may think
He can turn the wheel on which he turns. The play, set in 1170 and written in the 1930s, has a strangely contemporary feel to it. Perhaps it is because of its central idea, which is timeless — the struggle of the individual against authority, maintaining one’s conscience in the face of everything and everyone urging you to take the easy way and go with the flow. Eliot is suggesting that Becket knew he couldn’t fight city hall, except in his refusal to acquiesce.

In Eliot’s play, Becket accepts his fate. In fact, he seems almost to embrace martyrdom. He resists the temptation to give in to the very end and says what are probably the best-known lines of the play.

Now is my way clear, now is the meaning plain:
Temptation shall not come in this kind again.
The last temptation is the greatest treason:
To do the right deed for the wrong reason.

Murder in the Cathedral speaks to our temptations today. We may not be facing the specter of death in a chapel of a great church, but Eliot reminds us how easy it is sacrifice our beliefs, our principles, and ultimately our dreams on the altar of power and just getting along.

T.S. Eliot at the British Library, Part 1 and Part 2

Photo by Ben124, Creative Commons, via Flickr. Post by Glynn Young, author of Poetry at Work and the novels Dancing Priest, A Light Shining, and the newly published Dancing King.