We’re sitting in an auditorium in the British Library’s conference center. The library, part of the British Museum until 1973, is housed in a huge modern building near the St. Pancras train station on Euston Road, just north of Bloomsbury but still considered central London. The auditorium’s seats slope down to the stage. It’s a good crowd, some 150 people, even if the auditorium isn’t filled. The British Library seems to have taken this anniversary of Eliot’s death seriously. A few weeks previously, it held a reading of Eliot’s “The Waste Land” by actor Viggo Mortenson (Aragorn in The Lord of the Rings film trilogy). That event was sold out, and the library scheduled a second reading, which also sold out. During British National Poetry Week in early October, organizers scheduled an “Eliot Walk” in London’s financial district where Eliot worked in the 1920s (even then, poetry wasn’t a self-supporting proposition).

The program, set for 90 minutes, is a discussion between the two editors, followed by questions and answers. The editors, Jim McCue and Christopher Ricks, step up to the stage and get themselves “miked up.” 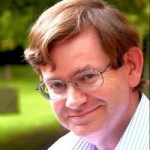 For 15 years, McCue worked for The Times of London, and a fair portion of that spent writing about books. He’s the author of Edmund Burke and Present Discontents and served as editor of the Penguin edition of Selected Poems of Arthur Hugh Clough. He’s also written numerous articles and essays, many of them on Eliot, including “Editing Eliot.”

Ricks is co-director of the Editorial Institute at Boston University. He’s published numerous books on Eliot and other poets, including T.S. Eliot Poems: 1909-1197: Invention of the March Hare (1996), The Oxford Book of English Verse (1999), and Dylan’s Vision of Sin (2005).

“They clearly have street cred, ” I think to myself, as they begin their discussion, sitting side by side.

McCue begins, and there’s no question of what he thinks of his subject and the author. “T.S. Eliot is the greatest poet of the 20th century, ” he says. “Modern poetry begins with Eliot. Eliot towers in the 20th century English literary landscape, partly because of his writing and partly because of his work as an editor. By whatever criteria you choose, Eliot is going to be a towering figure.”

He describes the process of creating this new edition of the collected poems. “We had to review hundreds of editions of his published poems, and so many had minor variations. There was no list of where all the manuscripts are, so we had to scan a great deal of scholarly articles to find what was out there. We found some 300 or more pieces not previously collected, in additional to formal published material and ‘informal’ material, like the poems he wrote in his little newspaper he published when he was 11. His mother had kept them all. We also had his schoolboy poems and what he composed at Harvard.”

The editors went beyond his poetry to his work in banking. “At the bank, ” McCue said, “he wrote regular articles about exchange rates. We also have his reader reports (of book manuscripts), and all the different kinds of poetry—he wrote a very wide range. And all of this is the product of one mind, and it is connected.”

All of the editions and manuscripts had to be integrated and synthesized. And the editors did what had not been done before—they developed a reference system of Eliot’s poetry that made coherence of the past and would be usable in the future.

Christopher Ricks adds his appreciation for Eliot. “We need to read T.S. Eliot. He wrote nothing that isn’t important. What our commentary does is to suggest the riches that are there in Eliot. Our edition doesn’t include comments by commentators. There was a question of what was critical and what was factual.”

Eliot, says McCue, said that Shakespeare’s works are really one poem. “We found the same with Eliot.”

“The publisher (Faber & Faber, where Eliot worked as an editor after banking) and the Eliot estate have been enormously helpful, ” says Ricks, “and gave us good advice on how to write this, to have the notes on the page summarized with their location in the back of the book.”

Next week: Ricks and McCue on why having readers of poetry is so important for the study of poetry, and their insights into many of Eliot’s famous and not-so-famous poems.

Photo by Mohammed abushaban, via Wikimedia Commons. Post by Glynn Young, author of the novels Dancing Priest and A Light Shining, and Poetry at Work.