It is late 1860. British explorers are in Africa, seeking the source of the Nile River. The Second Opium War has just been brought to an end in China. The first professional golf tournament has been held in Scotland, and would soon become known as the British Open. In the United States, Abraham Lincoln has just been elected President, and South Carolina preparing to vote to secede from the Union.

And in London, Charles Dickens sends his friend John Forster a letter, describing a new “little piece” he’s been working on and is on the verge of completing. Dickens needed something for his magazine All the Year Round; a novel by writer Charles Lever that was being serialized was simply not drawing the interest Dickens had hoped for. He described his new story as “fine, new, and grotesque,” and he said planned to publish it in 20 numbers or installments, beginning Dec. 1 (there would be a total of 36 episodes). 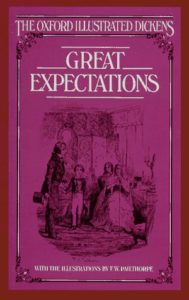 That “little piece” was Great Expectations, which came to be one of the author’s best and most beloved works. It was a success from the very first episode.

It was required reading in my 9th grade English class; A Tale of Two Cities was assigned in 10th grade and David Copperfield in 12th (11th grade English was devoted to American literature, with the required novel being The Adventures of Huckleberry Finn). To reread Great Expectations after, well, quite a number of years is to rediscover a story that isn’t what I remembered it to be.

Yes, I remembered the hero named Pip, short for Philip Pirrip. I knew the story started when he meets an escaped convict in a churchyard cemetery. I recalled that most vivid of characters, images and scenes, Miss Havisham, the aging lady who was abandoned a few hours before her wedding and who had shut herself in, still wearing the once white and now yellowing wedding dress, with her insect-infested wedding cake still on the table, and all the clocks in the house stopped at 20 minutes to 9 a.m., the exact time she learned that her groom-to-be had disappeared, with quite a bit of her money. And I remembered Estella, the beautiful girl adopted by Miss Havisham, who would come to be an instrument of revenge upon all men by Miss Havisham. I also didn’t remember how funny Great Expectations can be. Dickens was a comic genius in his character descriptions, especially of Pip’s sister Georgiana; a local character named Mr. Pumblechuck; a boy who works in a tailor and undertaker business and is simply known as “Trabb’s boy,” no matter how old he gets; and the mother of his good friend Herbert, Mrs. Belinda Pocket, the lady reared by her father to carry a title but who had missed that opportunity. What I’d forgotten was how much the story needed these comic characters and the humor, because it is a serious story, almost continually bordering on tragedy.

And I’d forgotten the atmosphere. The scenes drawn by Dickens are so striking and so real that you think you’re in Joe Gargery’s blacksmith shop, Miss Havisham’s dining room with the insects and rats, the churchyard with Pip and the convict, in Mr. Jagger’s law offices, or in Pip’s and Herbert’s room in the Temple area of London. It is notable that Great Expectations was the second novel (after David Copperfield) to be told in the first person. All of the previous works had had a third-person narrative viewpoint. That viewpoint helps give the story its power; like Copperfield, Pip is not a character invented out of whole cloth but has a considerable amount of his author in him.

Perhaps the most important thing I didn’t remember was Great Expectations as a story of family, of friendship, of love unrequited. It is a story about the choices we make, the things that happen to us, and how the choices and events shape us and change us. It’s about opportunities just within our grasp but lost.

What a marvelous story this is.

The Strangeness of “A Tale of Two Cities” by Charles Dickens

Photo by Alexi Alvisi, Creative Commons, via Flickr. Post by Glynn Young, author of the novels Dancing Priest and A Light Shining, and Poetry at Work.