By poetry standards, Simon Armitage is one of Britain’s most successful poets, with some 11 collections and numerous recognitions and awards. But his career has embraced far more than poetry. He’s written for opera, theatre, radio, television, and film. He’s published two novels and two travel books. He’s edited poetry anthologies. And he has translated Sir Gawain and the Green Knight from Middle to modern English, a work recognized by The New York Times and the Los Angeles Times as a book of the year.

You might think that translated from Middle to modern English shouldn’t be that difficult, until you try to read Chaucer’s Canterbury Tales in the original. What is curious about Sir Gawain and the Green Knight is a separate poem found in the manuscript with it, a poem simply called Pearl. It is the only known version of the poem in existence, and the manuscript is kept safely at the British Library in London.

No one know who the author of the poem might be. It’s possible that it’s also the author of Sir Gawain and the Green Knight, since it was found in the same manuscript and clearly written or transcribed by the same hand. But it’s a rather marvelous poem, composed in a Midlands dialect of Middle English (in contrast to the Middle English of London). It has fascinated a wide array of poets and academics, including J.R.R. Tolkien, who also did a translation from the Middle English.

It was written by someone well-versed in theology but not likely a priest, Armitage says in the introduction to his translation of the poem, published early this year and recently named the winner of the PEN Award for poetry in translation.

The poem is composed of 101 12-line stanzas. It’s a poem about grief, a father’s grief for a dead child, a little girl. The father falls asleep and, in a dream, meets a young woman who tells him about her life in heaven, and actually shows him what that life is like. He comes to understand that the young woman is his little girl. And while the poem is called Pearl, the title is actually taken from the metaphor of pearls used throughout the poem, suggesting the gemstone and the parable of the pearl of great price recorded in the Gospel of St. Matthew in the Bible.

This is the 14th stanza, in which the now-dreaming father first sees the young woman. A more marvelous matter amazed me now:
beyond that beautiful water I witnessed
a crystal cliff, brilliantly bright,
radiant with glorious gleaming rays,
and seated at the foot of that summit was a child,
a noble girl, a young woman of grace,
wearing a gown of iridescent white.
And I knew her so well — I had seen her before,
Like sawn gold that glistens inside
she sat at the base of the cliff, and she shone.
I stared, astonished, and the longer I looked
the more I recognized and remembered her.

Armitage opted for a translation familiar to modern eyes (Tolkien’s translation is closer to the original Middle English but still understandable for the modern reader). But even this one small example from the longer poem suggests that the poet, whoever he was, was certainly in the same class his contemporary Chaucer. 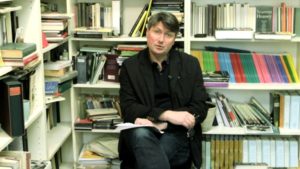 Pearl is a beautiful poem, and all the more striking both for its place in English literature and how it still speaks to the subject of grief today.

A short summary of Pearl by Interesting Literature

Photo by Bernd Thailer, Creative Commons, via Flickr. Post by Glynn Young, author of the novels Dancing Priest and A Light Shining, and Poetry at Work.