During his lifetime, the English Puritan minister and writer John Bunyan (1628-1688) wrote some 60 works, mostly collections of his sermons. After the death of Oliver Cromwell (1599-1658) and the restoration of the Stuart monarchy in 1660, Bunyan spent 12 years in prison for refusing to stop preaching.

It was during his imprisonment that he began work on his best-known work, still in print today, the allegory Pilgrim’s Progress. The work wasn’t published until 1678, six years after his release from prison. The poet takes a deep look at the world around him. The poems aren’t what one would associate with the word “puritanical,” nor are they all directly about religious topics. To be sure, there is a poem about the Lord’s Prayer. But there are many more poems about nature—birds flying in the sky, a lark and a fowler, trees, a meditation upon an egg, sunrise and sunset, fish and streams, and bees. Bunyan often includes references to religion and faith; he was a preacher, after all. But this poem about the time before sunrise is fairly typical of what he does.

Meditations Upon the Day Before the Sun-Rising 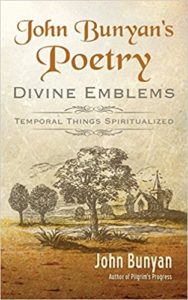 But all this while, where’s he whose golden rays
Drives away and beautifies our days?
Where’s he whose goodly face doth warm and heal,
And show us what the darksome nights conceal?
Where’s he that thaws our ice, drives cold away?
Let’s have him, or we care not for the day.

Thus ’tis with who partakers are of grace,
There’s nought to them like their Redeemer’s face.

Bunyan meditates upon a candle, the sacraments, the sun reflections on clouds, moles, the cuckoo, the butterfly, and more. The collection includes a delightful and lengthy conversation between a sinner and a spider, in which the spider convinces the sinner of the errors of his ways. These poems are not what a contemporary reader might expect for children. They are grounded in the real, physical world, drawing upon nature and everyday objects and events. The language is the language of adults; these poems do not “talk down” to children but instead assume that a typical child would hear and understand what the poems say. They also speak to behavior that children (and adults) would be familiar with, such as stealing, wearing ostentatious clothes, and showing kindness.

Bunyan’s Divine Emblems open a window on a world long gone, but it is a world we can easily recognize and understand, both as adults and as children.