I was a teenager when I read A Tale of Two Cities by Charles Dickens, and Paris became a place of both fascination and fear. When I actually visited the city in 1999, I experienced both, although the fear has less to do with a mob and a guillotine than with pickpockets and the rather thuggish-looking character who followed us from the Metro to the Victor Hugo House in the Marais.

Our sense of place is powerful.

Two poets recently dealt with the sense of place in their collections, one describing life in a very specific place – contemporary Israel – while the other draws upon the places of both childhood and imagination (including, coincidentally, the Holy Land).

Rachel Heimowitz, in her chapbook What the Light Reveals, includes 19 poems about modern Israel. We learn about the cities, the people, terrorism, history and theology, and the land, especially the land, all described from a vividly personal perspective. An example that focuses on the land in the broadest, almost conceptual sense, is “Walking the Land.” 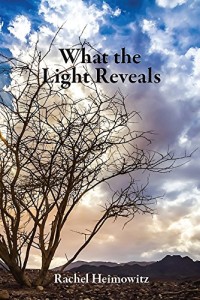 You lounge, waves caress you in your indolent pose:
an arm tucked, a knee bent, feet dangled in the Red Sea.
I want to walk barefoot in your desert, gold and aerose.

Your volcanic black hair splashes, it shimmers, it flows;
your eyes, fresh as snow, gaze down to the valley,
as you stretch. Waves linger where you’re exposed.

The wind rubs against you, releases those anagogic moans,
sweeps over you from ocean to Sea of Galilee.
I want to walk barefoot over your undulant folds.

Aroused by your scent: orange, eucalyptus, both
in fields of goldenrods, poppies, soft leafy greens.
You laugh, waves embrace you in your repose.

Your heart is where God lives, city of ancient stones.
I want to bury my face, breathe in your history;
I want to walk barefoot, revealed, where the Temple rose.

Promised to our Fathers, our key, our ancient home;
Your warm recesses nurture, provide abundantly.
You are dry air, sunshine, where everything grows,
and I want to walk barefoot, endlessly, over all of those.

Heimowitz’s poems have been published in Spillway, Crab Orchard Review and Prairie Schooner, and her poetry has been nominated for a Pushcart Prize. She is currently studying for her MFA degree in Oregon. What the Light Reveals is a small work, filled with beauty, longing and, yes, even love for the land called Israel.

In Streets as Elsewhere, J.L. Jacobs brings an accomplished eye and hand to this idea of place. Her poetry had been published in Ploughshares, New American Writing, New Orleans Review, Fascicle and Octopus, among other journals, and prior to this most recent collection, she has published Inflorescence (1992), The Leaves in Her Shoes (1999), and the chapbook DreamSongs (2004). She lives and works in Oklahoma.

Streets as Elsewhere, with that almost dreamlike title, includes some 51 poems, both individual poems and series of connected poems. Not all are directly about place, but most if not all seem to spring from a sense of place—the places one comes from, where one is, and those that inhabit our imaginations. All are fine poems, and I particularly liked this one: 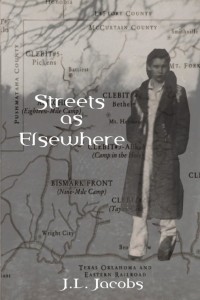 Are there only avenues in the Holy Land?

Of your hair
and the angel in your eyes.
They stare out to sea.
Your throat and skin     cold, blanched.

I awaken in the dark to a quaint notion of ancient geographers
and it from woman back to woman
with one walking beside you.
Singing.     Her name does not translate.
It is her hair and her voice falling of pastorals that range apart.

Who will recall sleep?
I met all the women
Yet     one woman     singular
between the cradle and the bed.

It will end she says with angels
in a wine cellar.
We have faith     but the oaks are motionless.
Ancestral posturing toward this distant stronghold.

See here charts for navigating the most distant lands.

We are dismantling a house
slowly     in short     her inward parts.

(Far off among the trees a night fisherman wades upstream.)
He crosses under the moon     and sees
a girl standing by a ferry rail.

Snake-doctors in the dusk.     Birds, as long faces
vision into mountains.
These are my nightmares of over-ripened fruit.        Cut open.

You are asleep. Your lost face near.
Your heart into trees. It is the same earth
houses, strange, distended and I cannot find you.

Those additional spaces between some of the words are a trademark of many of the poems in the collection, serving to emphasize and punctuate. Jacobs uses strong, memorable images – the woman whose name does not translate; following rivers laid down in Dutch charts; and “my nightmares of over-ripened fruit.”

Streets as Elsewhere is a noteworthy, impressive collection.

Photo by Broo_am (Andy B), Creative Commons, via Flickr. Post by Glynn Young, author of the novels Dancing Priest and A Light Shining, and Poetry at Work.