Have you experienced an assault by a vinegar wind? Have you seen the man selling peacock features on the roundabout? Are your curtains full of soot? Is your table gilded with international meats? Have you seen tea stirred in a cruel way?

These are among the images and metaphors of the poems of Kingdomland by British poet Rachael Allen. It’s a strange landscape she describes, one that is simultaneously unfamiliar and oddly recognizable. The images, and the poems they’re embedded in, are jarring and perplexing (she notes that several of the poems in the collection were inspired by artworks). And yet all of us have had nights of poor sleep, failed relationships, memorable summers in our youth, and not recognizing our own faces in the mirror.

These are the experiences and memories of everyday life, but she quickly snatches them from our gaze, sharpens them, hones them, and then flings them back at us. The memories and experiences are still what they were, but now they look and seem different. They sit up. They make us notice. And they can bite.

Allen will take something like a childhood fear of a stranger roaming at night, like the story or fairy tale a parent tells children to keep them in their beds, covers drawn over their heads. She will place the story in a setting, a black-and-white night, and then turn it on its head. 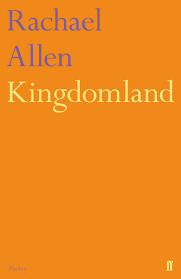 A landscape unpainted:
a cold stream of lean black weeds
leading towards a stile
and a field tilting up.
Trees turn to veins against marbly sky
in the half hour before night.

During a certain moon
children are said to have seen
a slim man walking over the field
in a low mist, towards the stile,
leading a girl
in pale blue pinstripes
into the glowing pinstripe forest beyond.

Sometimes he will stop and lean down,
and scrape the earth,
then earth and touch are knotted
for they are both cold.
No one is scared of him,
more of the thick-dark broom, drowned roots
and full night, the pitiful rabbits’
eyes yellow on the hillside. The stranger is no longer a stranger, no longer threatening. He is leading the child “in pale blue pinstripes” to where she belongs and what she is part of.

Allen is the poetry editor for the literary magazine Granta and Granta Books and serves as co-editor of the poetry anthology series Clinic and the online journal Tender. Previously, Faber & Faber published a pamphlet of her poems as part of the New Poet Series. Kingdomland is her first published collection.

Allen has assembled an image-rich, image-provoking collection of poems in Kingdomland. The result is arresting and unexpected, taking you into that “glowing pinstripe forest.”

Rachael Allen reading at the 89Plus Marathon in 2013