When you’ve written an entire book of poetry about the biblical character of Cain, as British poet Luke Kennard has done, it should be no surprise to find his other books of poetry are just as surprising and just as entertaining, and tell often wildly entertaining stories, as the work on Cain.

Consider Kennard’s 2013 collection Planet-Shaped Horse. There is no title poem. His subjects can be disjointed, but he’s always playful, whether he’s discussing the prophet Elijah or the flatness of his elbows. varied as the prophet Elijah and the flatness of one’s elbows. He writes about his own death, stupid words, hermits, the idea of pilgrimage, being a snob, and time capsules. A character named Miranda appears in several of the poems, and you wonder whether she’s a girlfriend, a literary device, a muse, or perhaps someone who’s keeping the poet honest.

It can be bewildering and make you wonder where it’s all going, at least until you get there. And you do get there. Once you do, you look back at the journey of each poem and realize what the poet has done, like in this poem:

The Beautiful Necklace of Self-Denial 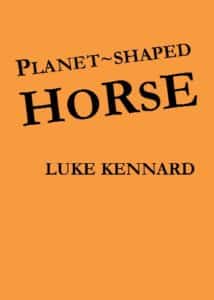 I’m so modest I’ve been handing out
someone else’s business cards for the last five years.
In the mail I learn that Patrick V. Cane has died
(Weather vane, loose tile) and that I’m to stop.
‘My problem with the Shepherd of Hermas,’ I say,
mouthful of bolognese, ‘is, you know, what was so great
about his accuser? We’re supposed to believe that she
never entertained an impure thought?
It’s like all of the riches and treasures analogies:
the lovely and expensive earrings of renunciation.
I thought we weren’t supposed to care about earrings.’
‘Have you read The Shepherd of Hermas?’ says Miranda.
‘or did you just look it up on Wikipedia?’
Just to spite Miranda I have an impure thought about her.
‘The homeopathic cure for insomnia is a one-man band,’
She says. ‘And vice-versa.’

If you’re not familiar with The Shepherd of Hermas, it’s an early Christian church writing, likely from the first or second century A.D., that was popular for a time but never really part of the canon of New Testament books. You can read the Wikipedia article or the J.B. Lightfoot translation of 1891. The story is about a shepherd accused of having an impure thought about a woman, who becomes his accuser.

There’s a lot going on in this poem: the references to an apocryphal New Testament book; a discussion in which the writer finds himself guilty of exactly what the story of Hermas is about; the use of someone else’s identity, until someone complains that the someone else has died (from what sounds like a loose tile and weather vane); what is obviously a dinner or lunch discussion (that “mouthful of bolognese”); and then the meal companion, Miranda, questioning whether the speaker has even read the text he’s talking about. That line about modesty and business cards is a clue—being something you’re not, whether it’s a textual critic, a reader, or even being modest, that claim made in the first three years words of the poem. What modest person announces that he’s modest? This is classic Kennard, and we suspect he’s having a bit of fun in the process.

Kennard teaches English and creative writing at the University of Birmingham. He has published several collections, including The Solex Brothers (Redux) (2005); The Migraine Hotel (2009); The Harbour Beyond the Movie (2010); and A Lost Expression (2014). He has also published a sci-fi mystery, Holophin (2012), and a novel, The Transition.

If there is a subgenre of poetry called “thought-provoking romp,” the poems of Planet-Shaped Horse would be a sterling representative. Since there’s not such a sub-genre, be prepared for a fun-punched discovery about words, language, ideas, and conventions.

Photo by Pacheco, Creative Commons, via Flickr. Post by Glynn Young, author of  Poetry at Work and the novels Dancing Priest, A Light Shining, Dancing King, and the newly published Dancing Prophet.