Whyte, a poet, consultant, speaker, and even tour guide, published a book in 1996 called The Heart Aroused: Poetry and the Preservation of the Soul in Corporate America. He asked a question that no one else was asking at the time: Can poetry save the corporate soul?

My experience at the time was workplace convulsion after workplace convulsion, the bad and the good of the old ways swept out, replaced by what was often and only the bizarre. And I mean bizarre — meditation rooms (bring your own pillow), senior executives playing with Legos, wandering minstrel and choral groups serenading employees in their offices, self-directed employees (like the one who decided a great job was to read novels for seven hours a day and teach them for an hour at lunch in the corporate cafeteria). Whyte and his books (The Heart Aroused was followed by Crossing the Unknown Sea: Work as a Pilgrimage of Identity) helped me navigate what was happening, using poetry as a rudder. In addition to his business-oriented books, he had also published poetry, collections like Where Many Rivers Meet (1990), Fire in the Earth (1992), and The House of Belonging (1996). He’s published several more since then.

Whyte is still consulting and still writing poetry. His latest collection is The Bell and the Blackbird, published in July. This one is vintage Whyte — quiet poems, a consciousness of the natural world, and a well-ordered mind often considering a less-than-well-ordered universe. He includes poems written to specific friends, so well observed and gentle that they seem almost love poems. He writes in memory of the dead, including a poem about a friend who commits suicide. He writes about place, too, like Ireland and Australia, the Nakasendo trail region of Japan, and the moorland of his native Britain. (Whyte and his family live in the Pacific Northwest now.)

Whyte writes long poems and short poems, all of them reflecting a practiced eye and a heart that, if not aroused, is at least awake and aware. This poem, for example, sounds like one of his Nakasendo poems, but it’s placed in a different section. 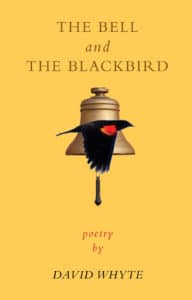 Seeing you
place that stone
so carefully
on the roadside
shrine,
I inclined my head
to watch it
balance and stay
as you
lifted your hand
so breathlessly
away,
just the slightest
most subtle
inclination
of the head
toward
you,
that afterwards
walking
toward evening
I realized
had been
my bow. The poem is deceptively simple. Read it the first time, and it’s the poet observing a companion place a stone on a roadside shrine. Read it a second time, and you realize the poet is bending toward his companion in the same way the companion is bending toward the shrine, suggesting a kind of sacred reverence and a depth of relationship far beyond noticing a single act at a shrine. And this understanding is understood not in the moment but later, “walking toward evening,” which could mean the same day or as one’s approaching old age.

Whyte packs a considerable amount of ideas into a few, simple words.

He received a degree in marine zoology, and he holds honorary degrees from Neumann University of Pennsylvania and Royal Roads University in British Columbia. He is also an Associate Fellow of the Said Business School at Oxford University.

The Bell and the Blackbird is a moving collection, full of surprises, simplicity, and depth.

The Heart Aroused: Chaos and Complexity

Can Poetry Save the Corporate Soul?

Photo by Matt Chinnick, Creative Commons, via Flickr. Post by Glynn Young, author of  Poetry at Work and the novels Dancing Priest, A Light Shining, Dancing King, and the forthcoming Dancing Prophet.