Philip Britts (1917-1949) was an Englishman who joined the Cotswold Bruderhof community. The Bruderhof was (and still is) a network of faith communities where members live together and share all land and possessions. They are also pacifists.

Consider the plight of Britts, who was living and farming in rural England when World War II began. Some members of the community were German; the Bruderhof started in Germany. The British government and local authorities weren’t terribly impressed by both pacifists and Germans living in rural England when Britain was fighting for its survival against Nazi Germany. The British could accept the pacifists, but not the Germans. The community was given a choice: The Germans had to be interned or leave, or the entire community had to emigrate. The Cotswold Bruderhof chose emigration, and eventually settled in Paraguay, the only country that would accept all of them. It wasn’t an easy life; farmland had to be tilled, crops planted and harvested, locusts fought, strange diseases encountered (one would eventually kill Britts when he was 31).

Britts kept a journal, wrote essays, and also wrote poetry. His writings and poems have now been collected and published under the title Water at the Roots, edited by Jennifer Harries and published today. Many of these have never previously been published.

To read the poetry and prose of Britts today is an experience akin to reading Wendell Berry or Joel Salatin. Britts shares their beliefs in community, local agriculture, farming methods, and faith; where he differs is in the Bruderhof belief in and practice of sharing land and possessions. This is not “communism” or “collective farming” as practiced under the former regimes in the Soviet Union; this is more how the Bruderhof understood the practices of the very early Christian church.

In his poems, which make use of traditional rhyming, Britts displays a simultaneous reverence for farming, the land, and the natural world. 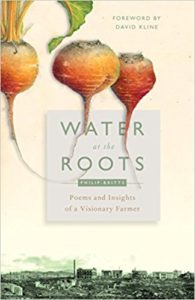 The Cotswold Bruderhof about 1940

Harries, the editor of the book, organizes Britts’ writings and poetry both chronologically and thematically. Water in the Roots is a biography and a collection of writings. But she tells his story well, under the themes of wilderness, plowing, planting, cultivating, and harvesting.

What emerges is the story of a man who lived his faith and lived his beliefs in community property and farming. One gets the impression of a quiet, gentle man, but also a man of inner strength.

More than 70 years after his death, the Bruderhof community he helped to create in Paraguay still flourishes. Water in the Roots is perhaps a good explanation of how that’s happened.

Photo by Lane Pearman, Creative Commons, via Flickr. Post by Glynn Young, author of the novels Dancing Priest, A Light Shining, and the newly published Dancing King, and Poetry at Work.