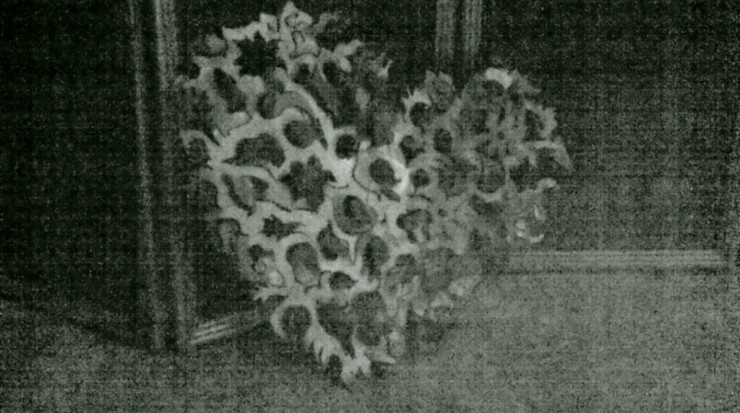 A songwriter and musician is having trouble with the lyrics for a song she’s trying to write for a friend, who recently died from breast cancer. From her bookshelf, she pulls a volume of poetry given to her by her father as a gift. She hadn’t previously looked at it. She begins to read, and the song lyrics begin to unfold before her eyes.

The result is a song called “Tillery,” recorded by Becca Stevens and using the words from a poem entitled “Winter” by poet Jane Tyson Clement (1917-2000). Here is the poem, written in the mid-1950s: The dark emerging trees
from the new-winter wood
are lovelier than leaves,
as cold is also good.

The heart’s necessities
include the interlude
of frost-constricted peace
on which the sun can brood.

The strong and caustic air
that strikes us to the bone
blows till we see again
the weathered shape of home.

No season of the soul
strips clear the face of God
save cold and frozen wind
upon the frozen sod.

Stevens read the poem and began reading all of Clement’s poetry. With the permission of the poet’s publisher, she would eventually use words from five poems in her song lyrics. And Stevens recorded “Tillery” for her friend who died from cancer, using the words from “Winter.”

Clement’s story, her poetry, and Stevens’ experience come together in The Heart’s Necessities: Life in Poetry. It’s more than a beautiful book, although it is that. It’s a beautiful book that’s beautiful in spirit, an appreciation and a tribute to an exceptionally fine poet. Clement was born in North Carolina but grew up in New York City and attended Horace Mann School. Her father worked at Columbia University. She won the poetry award at Horace Mann and studied literature and poetry at Smith College. She became interested in the Quakers and got involved in the peace movement. She became a teacher, married fellow pacifist Robert Clement, and eventually joined the Bruderhof religious community. She wrote poetry throughout her life, publishing The Sparrow and Other Stories with Poems, The Secret Flower: and other stories, and No One Can Stem the Tide: Selected Poems 1931-1991. Stevens is a composer, educator, and leader of the Becca Stevens Band. She has worked with notable composers and musicians like David Crosby and is a member of Crosby’s Lighthouse Band. Her music is rooted in several traditions — jazz, Irish/Appalachian folk, indie pop, West African music —  and poetry. She lives in Brooklyn.

The Heart’s Necessities combines biography, poetry, commentary by Stevens, and photographs. Each of the Clement poems included is a small, beautiful gem; she uses nature metaphors so simply and so adroitly that you find yourself almost stunned into silence. You can also see the appeal and inspiration these poems possess for composers.

I’m not sure whether I would call this a book. A better description might be “a profoundly moving experience.”

The Poetry of Farming: “Water at the Roots” by Philip Britts