Pressing my cheek against her yellow slicker, I settled into the firm circle of her arms. “Ready?” she asked. “Ready!” I shouted. Rain poured around us.

A few minutes before, my mother had informed Linda Jorwicz, carpool mom for the day, that I wouldn’t be going to kindergarten; without boots, I couldn’t possibly walk through the flooded courtyard. I was weeping at the thought of missing my daily adventure (yes, I was one of those kids), but my parents had never owned rainboots or thought to buy me any.

Linda wouldn’t hear of it. Scooping me up, she waded and pushed through the accumulation—five inches and rising. After placing me in the back seat next to her daughter—my best friend—we drove to school through the storm, one of the biggest the city had seen.

My parents lived most of their initial immigrant years in Queens, New York, and my earliest memories live there too. Anchoring the images of ubiquitous sidewalks and corner grocery stores and bus stops and shiny metal trash cans is the courtyard in which our tiny walk-up apartment was situated. “Home” was never confined to that apartment—it spilled daily into that center space in which adults sat and talked on stoops and children played from dawn to dusk when they weren’t in school.

Queens was—and still is—a city of neighborhoods and neighbors, thickly populated with residences bordering tiny green arenas. There, I joined the other kids, wandering sometimes in groups and sometimes in hordes, popping into one of our apartments to gorge on hard candy, swarming the ice cream truck with our importunate demands, and even licking each other’s ice cream cones. (This last horrified my parents, as the exchange of bodily fluid is taboo in our culture, with the exception of marriage. We still joke that I possibly married Jason Greer by sampling his cone.)

We were white and black and brown, we were of Indian and European and African descent, all living our personal versions of the American dream. Except for the Raymonds, the sweet elderly couple who stopped and joked with us on their evening walks, we were all families just starting out, whose overlapping accents and dialects and lingo infused my school English and bred my lifelong love for the melodies and harmonies and cadences of language and words. Indeed, my early memories are a collage of conversation and culture, a microcosm of the American ideal right in my front yard.

And woven through this microcosm was friendliness: the neighbors would look after children when parents were in a pinch. Or bring meals when someone was taken down by flu. Or carry a bootless child to the car in the rain so she wouldn’t miss kindergarten.

As a child, of course, much of our immigrant reality escaped me. My father’s employers retracted their promise of housing upon his arrival to the city. Without limits on his hours, he spent 60, 70, 80 hours at the hospital every week, sleeping there as needed, absent from his family, while my young mother tried to figure out the interweave of Indian customs with American life. What’s the best substitute for toor dhal, that staple of Indian cooking? (Split peas, apparently.) Bus schedules, cold weather clothing, snow shovels—everything was new.

Their hard-earned car was stolen. They scrimped, saved, borrowed, found second-hand clothes and appliances and cookware. And they hosted a continuous flow (eventually, deluge) of visitors from India, all of whom had to be housed for weeks and sometimes months, fed, and taken to see the Statue of Liberty (“Yes, honey, we’re going there again”). And there were the threatening letters—“Go back to wherever the hell you came from.”

But, despite hardships and hindrances, my family felt safe and comfortable at home and in the courtyard, welcomed by the neighbors, by Queens, by New York, indeed, by America. We were different, and so was everyone around us, and it just worked. I was still young when we moved away from Queens, and I remember the initial shock of moving to our new town in Ohio—not only because I looked different, but because almost everyone around me looked the same.

Coincidentally, my husband, whom I met decades later, also started his immigrant journey in Queens. And he, too, tells the harrowing stories of immigrant trauma: the job offer rescinded when his father reported for work, the gut-wrenching financial insecurity, having to relinquish admission to the college of his dreams. He arrived in New York just before starting high school, and the neighbors surrounding his own walk-up were Caribbean and Nigerian and Armenian, the newer immigrants of the ‘80s. While I struggled at that time to feel like I belonged in the Midwest, he felt immediately part of the Queens multicultural soup, a smaller portion of the American mix.

As my in-laws continued to live in Queens, I became a regular visitor long after moving away as a child, and during visits, I absorbed again the noisy walk-ups, the crush of ethnicities milling outside, the smell of humanity in the anterooms. But my husband’s Queens had multiple Hindu temples just minutes away. And a mosque on the corner with its calls to prayer. And community centers for those from various Eastern European and African and South American nations. And the nearby Jackson Heights, which had grown into a little India and was now packed with traditional clothing and cheap appliances and ethnic grocery stores where toor dhal, not to mention turmeric and fenugreek and asafetida powder, abounded. And, a few streets over, the best falafel of my life, with the loveliest, bitterest tahini atop it. The fabric of Queens had deepened, its assorted colors and flavors had continued to proliferate and blend.

Soon after the twin towers fell, we took the subway to Manhattan to visit ground zero, wanting to bear witness to the tragedy to the best of our ability. As we returned to my in-laws’ home, stunned and grieving, the enemy’s targeting of New York began to make a terrible sort of sense. After all, New York embodies the power and energy of inclusiveness and hybrid vigor; its evolving mosaic heralds our inevitable global community. I also felt the attack to be a very specific assault upon my little Queens courtyard and its open-minded, open-hearted embrace, which welcomed and encircled and protected me against the rain. 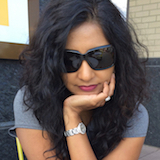 Dheepa R. Maturi
Dheepa R. Maturi is a writer of poetry, essays, and fiction. As an aspiring optimist, she loves to explore themes like connection, hope, and environmental harmony. Dheepa's first novel, recently completed, combines all of those themes into an eco-thriller. Dheepa's work has appeared in The Indianapolis Review, New York Quarterly, The Fourth River, and the book How to Write a Form Poem and more. Find her at www.DheepaRMaturi.com