William Wordsworth’s long autobiographical poem The Prelude was written and developed over a period of 50 years. The final version was published when he died in 1850, and it is the version that American readers are most familiar with. But it is the 1805 version that British readers know, and apparently the reason is nothing more than personal preference. (Penguin has published a text that includes all four versions: 1798, 1799, 1805, and 1850.) Wordsworth and his sister,  Dorothy, moved to Dove Cottage in the Grasmere area of England’s Lake District in 1799. They actually walked the last several miles of their journey to arrive on foot, which gave Wordsworth material and the experiences of wintertime in northern England for a poem (we don’t know what Dorothy may have truly thought about walking several miles in the snow).

This was the first home of their own that they actually lived in together. Orphaned as children, they and their three brothers had been passed from family member to family member. If for no other reason, Dove Cottage was important to the Wordsworths as their own family home. And it was here that Wordsworth wrote a considerable portion of the poetry he’s famous for.

The Prelude was intended to be his autobiography in poetic form. And it is one reason that it kept changing over the years, as he added more material, revised what he had written, and often rewrote whole sections.

Because imagination and what inspired it was so important to the Romantic poets, they tended to keep all of the various versions of what they wrote, so as to identify where poems and ideas had come from. Wordsworth seemed to have kept virtually all of his notes and versions, and Dorothy kept fairly detailed journals of not only the daily activities of life at Dove Cottage and their later homes but also of their travels and notes about her brother’s poems. Dorothy, in fact, often copied over his poetry in her journals and elsewhere. (Wordsworth’s wife, Mary Hutchinson, whom he married in 1802, also copied over many of his poems.) Jerwood Centre at the Wordsworth Trust in Grasmere

Most if not all of these notes, versions, journal entries and other writings have found their way to Jerwood Centre of the Wordsworth Trust in Grasmere. The trust was created in 1881 to preserve Dove Cottage, and eventually various collections of his writings were donated. In 2005, Jerwood Centre was opened (officially by poet Seamus Heaney) and it has become a focal point for scholars, writers, and academics studying the poetry of Wordsworth and his sister.

Some 24 manuscripts exist for The Prelude, all written between 1798 and 1839. Side-by-side comparisons can allow scholars to see how he developed and worked over his poems, changing words and ideas, and sometimes doing wholesale rewriting.

Dorothy played a critical editing role. Wordsworth often wrote poems on whatever was at hand—note paper, scraps, even published books by other poets. Dorothy dutifully collected them and kept them together. In 1832, Wordsworth took the latest manuscript and did a wholesale revision, and it became a different poem.

This is a scene from the 1799 manuscript of The Prelude. It describes a memory of Wordsworth as a boy “borrowing” a boat for a late night excursion on a lake. 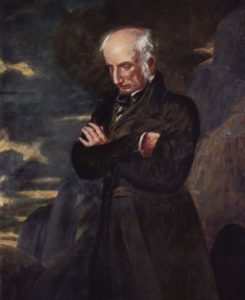 One evening I went alone into a Shepherd’s boat,
A skiff that to a willow-tree was tied
Within a rocky cave, its usual home;
The moon was up, the lake was shining clear
Among the hoary mountain; from the shore
I pushed, and struck the oars, and struck again
In cadence, and my little Boat moved on
Just like a man who walks with stately step
Though bent on speed.
It was an act of stealth
And troubled pleasure; not without the voice
Of mountain-echoes did my boat move on,
Leaving behind her still on either side
Small circles glittering idly in the moon,
Until they melted all into one track
Of sparkling light. A rocky steep uprose
Above the cavern of the willow tree,
And now, as suited one who proudly rowed
With his best skill, I fixed a steady view
Upon the top of that same craggy ridge,
The bound of the horizon, for behind
Was nothing but the stars and the grey sky.
She was an elfin pinnace; twenty times
I dipped my oars into the silent lake,
And, as I rose upon the stroke, my Boat
Went heaving through the water like a swan—
When from behind that rocky steep, till then
The bound of the horizon, a huge Cliff,
As if with voluntary power instinct,
Upreared its head: I struck, and struck again,
And, growing still in stature, the huge cliff
Rose up between me and the stars, and still
With measured motion, like a living thing,
Strode after me. With trembling hands I turned,
And through the silent water stole my way
Back to the cavern of the willow-tree.
There, in her mooring-place I left my bark,
And through the meadows homeward went with grave
And serious thoughts: and after I had seen
That spectacle, for many days my brain
Worked with a dim and undetermined sense
Of unknown modes of being: in my thoughts
There was a darkness, call it solitude,
Or blank desertion; no familiar shapes
Of hourly objects, images of trees,
Of sea or sky, no colours of green fields:
But huge and mighty forms, that do not live
Like living men, moved slowly through my mind
By day, and were the trouble of my dreams.

The Prelude, with a total of about 8, 000 words, wasn’t published until after the poet’s death, and that, interestingly enough, was by his design. He was aware of his family’s financial needs and he knew the copyright would have expired much earlier had he published it earlier. And while the poem underwent significant changes over the decades, the very first lines written in 1798 were the very first lines of the 1850 version. OH there is blessing in this gentle breeze,
A visitant that while it fans my cheek
Doth seem half-conscious of the joy it brings
From the green fields, and from yon azure sky.
Whate’er its mission, the soft breeze can come
To none more grateful than to me; escaped
From the vast city, where I long had pined
A discontented sojourner: now free,
Free as a bird to settle where I will.

It’s good to know that some lines, even if only a few, made it through from beginning.

William Wordsworth and the Language of the Common Man

William and Dorothy Wordsworth: ‘All in Each Other’ – Lucy Newlyn (2013)

The Grasmere and Alfoxden Journals by Dorothy Wordsworth

Photo by Mike McCune,  Creative Commons, via Flickr. Post by Glynn Young, author of the novels Dancing Priest and A Light Shining, and Poetry at Work.