I had studied some of the poems of  William Wordsworth poems in high school, but it wasn’t until my English literature courses in college that I studied him seriously. Perhaps too seriously—our English lit professor for the period covering the Romantics through the Moderns had received her Ph.D. in the Romantic poets. Our tests and exams were often snippets of lines of poems,  and we had to identify which poet had written them.

When all else failed, I always guessed Wordsworth as the author; his poetry had been her particular passion. My guesses were about 85 percent right.

Perhaps it was that experience of studying him too closely that led me away (far away) from Wordsworth until just the past year. Studying the poetry of John Keats both before and after I participated in a Keats Walk in London led me back to Wordsworth.

This time, I worried less about snippets of lines and more about the poet and his poems. I learned how the poet who was all about revolution ultimately became Britain’s poet laureate and a pillar of the literary establishment. I learned about the critical importance of his sister, Dorothy, and why she is responsible for us knowing so much about how he wrote his poems. And I learned how he kept revising already published poems, including those of his Lyrical Ballads (1798, 1802) and his autobiographical The Prelude (1798, 1799, 1805, 1850).

Wordsworth (1770-1850) and his four siblings were orphaned at an early age, and spent a considerable amount of their childhood years living with various (and different) relatives. But they seemed to have received more than a decent education; Wordsworth himself ended up at St. John’s College in Cambridge. Fascinated by the French Revolution, he made two trips to France in 1791 and 1792, where he had a love affair and fathered an out-of-wedlock child. He would return a decade later, during a brief period of peace between France and Britain, and make provision for the child, a daughter. William Wordsworth as a young man

In 1795, Wordsworth met Samuel Taylor Coleridge (1772-1834), and the two became extremely good friends. Together, they wrote and assembled Lyrical Ballads, their major contribution to the Romantic movement. The poems emphasized two basic Romantic themes of feelings and imagination, and Wordsworth’s own emphasis upon nature. The poems were also a break with traditional poetry in that they used vernacular language (instead of the English of the upper classes), which spoke of and to the common people (critics sniffed at this attention to commoners). This poem from Lyrical Ballads is a good example:

The little hedge-row birds,
That peck along the road, regard him not.
He travels on, and in his face, his step,
His gait, is one expression; every limb,
His look and bending figure, all bespeak
A man who does not move with pain, but moves
With thought—He is insensibly subdued
To settled quiet: he is one by whom
All effort seems forgotten, one to whom
Long patience has such mild composure given,
That patience now doth seem a thing, of which
He hath no need. He is by nature led
To peace so perfect, that the young behold
With envy, what the old man hardly feels.
—I asked him whither he was bound, and what
The object of his journey; he replied
“Sir! I am going many miles to take
“A last leave of my son, a mariner,
“Who from a sea-fight has been brought to Falmouth,
And there is dying in an hospital.” 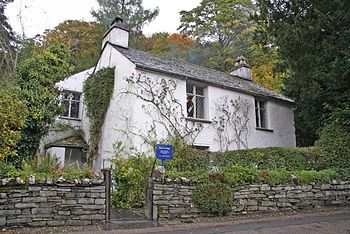 It’s difficult to read a poem like this today and wonder what the fuss would have been all about. But poetry readers in 1798 would have been far more at home with rhyming lines, with the very formal poetry of the 18th century, with subjects like romance and love. And here was a non-rhyming poem about an old man walking along a country lane, and, worse yet, written in language that anyone could understand!

Critics may have scoffed, but this work by Wordsworth and Coleridge changed poetry forever. Influenced as it was by the ideas of equality that were in the air because of the American and French Revolutions (and felt very threatening in Georgian Britain), Lyrical Ballads spoke profoundly to a new generation of poets. Wisdom could be found in nature. The poetic imagination was important. And poetry could appeal far beyond the leisured and cultured classes.

It was a revolution. Wordsworth did help usher in a new kind of poetry, and lived long enough to see it established and recognized.

Next week: Wordsworth’s The Prelude, and how he and the other Romantic poets were among the first to keep drafts and records of revisions.

William Wordsworth: The Prelude and the Poetry of Revision

Photo by Omer Unlu,  Creative Commons, via Flickr. Post by Glynn Young, author of the novels Dancing Priest and A Light Shining, and Poetry at Work.