Clive James is an essayist, poet, translator of Dante, cultural historian, critic, travel writer, lyricist, and novelist. As a television critic, he has had a large influence on the development of both British and American television. He’s published five collections of poetry. His translation of The Divine Comedy by Dante was a Sunday Times bestseller. He’s received national honors from both his native Australia and Great Britain.

In 2010, James was diagnosed with leukemia, with a poor prognosis. In 2012, his marriage broke up after he admitted a years-long affair. In 2014, in a poem entitled “Japanese Maple” for The New Yorker, James predicted his own death within a year. He’s sailed close to it a few times, but it is now 2016, and he recently told The Independent that the fact he’s still alive after predicting his death was “embarrassing.”

His most recent collection of poems, Sentenced to Life: Poems 2011-2014, was published last year, and is dedicated to Prue Shaw, his former wife and the mother of their two daughters. A physically slender volume of 37 poems, it includes several poems that became rather well known before the volume was published, including “Japanese Maple.”

The title, Sentenced to Life, is only mildly ironic. Most of us would understand a diagnosis of leukemia as a death sentence. Instead, James found himself coming to an understanding of life, including his own life. The poems are candid, sometimes brutal, and occasionally shocking. But when you’re dying, candor and shock are the least of your problems as you deal with the day-to-day of reality. 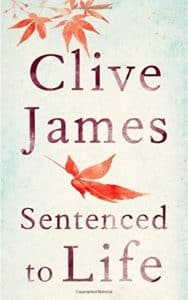 It may not come to this, but if I should
Fail to survive this year of feebleness
Which irks me so and may have killed for good
Whatever gift I had for quick success –
For I could talk an hour alone on stage
And mostly make it up along the way,
But now when I compose a single page
Of double-spaced it takes me half the day –
If I, that is, should finally succumb
To these infirmities I’m slow to learn
The names of lest my brain be rendered numb
With boredom even as I toss and turn,
Then send my ashes home, where they can fall
In their own sweet time from the harbor wall.

The poems are varied and pointed. James finds his eyes are letting in too much light. He nearly dies of pneumonia. He deals with the frailty of illness. He considers playing the grand old man but wonders if he’s too sick to pull it off. He’s installed in the last house he will know. Visitors can become uncomfortable and occupy themselves with small tasks and small talk.

But it is life James has been sentenced to, life and not death. That’s the central understanding he’s realized. And, yes, it changes things. From his title poem:

Once, I would not have noticed; nor have known
The name for Japanese anemones,
So pail, so frail. But now I catch the tone
Of leaves. No birds can touch down in the trees
Without my seeing them. I count the bees.

Even my memories are clearly seen…

Photo by Christian, Creative Commons, via Flickr. Post by Glynn Young, author of the novels Dancing Priest and A Light Shining, and Poetry at Work.