We’re standing on Church Row in Hampstead, in north London. Church Row is the oldest street in Hampstead, a longish block of attached townhomes lining both sides of the street from the shopping area to the Parish Church of St. John at Hampstead. Anita Miller, our guide for this Saturday “Keats Walk, ” stops our group of 12 in front of one of the homes in the middle of the block. “This has nothing to do with Keats, ” she says, “but notice the windows above each of the doors. Each one is different, because before the era of numbered addresses, that’s how you told people to find your house.”

The houses date from the 1700s, as does the church at the end of the street—1747, to be exact, although there’s been a church on the property here for more than 1, 000 years. It’s the church most associated with John Keats, because it contains a bust of the poet donated by an American admirer in the 1890s. Fanny Brawne, the young woman Keats was engaged to at the time of his death in 1821, was baptized here and attended the church with her family. But Keats, apparently, never set foot inside the building. He was an atheist, after all.

In the churchyard in front of the church, Anita reads the first of several of Keats’ poems she will read during the walk. It is the sonnet to “Solitude, ” published in 1815: O Solitude! if I must with thee dwell,
Let it not be among the jumbled heap
Of murky buildings: climb with me the steep, —
Nature’s observatory—whence the dell,
In flowery slopes, its river’s crystal swell,
May seem a span; let me thy vigils keep
‘Mongst boughs pavilioned, where the deer’s swift leap
Startles the wild bee from the foxglove bell.
But though I’ll gladly trace these scenes with thee,
Yet the sweet converse of an innocent mind,
Whose words are images of thoughts refined,
Is my soul’s pleasure; and it sure must be
Almost the highest bliss of human-kind,
When to thy haunts two kindred spirits flee.

The quiet churchyard, with its jumble of gravestones, is a fine place to hear this poem. A few people walk by as she reads, and one stays to hear the poem.

That we are in a churchyard listening to the poem written by an atheist seems simultaneously incongruous and fitting. Keats was inspired by the poetry of John Milton, old church architecture, the ruins of abbeys and monasteries in Scotland. He didn’t let his non-belief stand in the way of his poetry. Keats took inspiration where he found it.

Unless you read a good biography of Keats (I’ve been reading this one by Nicholas Roe, and it is a good one), it’s difficult to see how his poems fit so many of the cultural, intellectual, literary and political currents of his times. Keats associated with writers and editors who were considered at best suspect and at worst “republican traitors, ” “republican” in the sense of having pro-French sympathies. Napoleon had just been defeated for the second and final time, and to their dismay Keats and friends saw the old Bourbon kings restored in France. This was a time of social unrest in Britain as well, beginning to experience the full societal effects of the Industrial Revolution. William Wordsworth, who had been adamantly pro-French Revolution in the early 1790s, would be working to elect Tories two decades later. Many writers and poets saw this as a betrayal of their ideals.

As an example of how extreme political passions could run, Keats’ poem Endymion was panned by Blackwood’s Magazine. The writer, identified as “Z” but thought likely to be John Gibson Lockhart, the Scottish biographer of his father-in-law, Sir Walter Scott, ripped into the poem and Keats, believing that the abandonment of the classical poetry of John Dryden and Alexander Pope was but the first step of the unraveling of all society. They took their poetry seriously in the early 1800s. 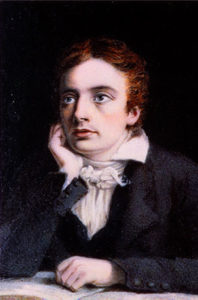 Keats, like many of his fellow poets and writers, also turned to nature for inspiration. In fact, the environmental movement which began in the late 1970s and continues strong today owes considerable philosophical, if not spiritual, understanding to the poetry of the Romantics like Keats.

Anita leads on across the street, past the “new” church cemetery (opened in 1812) and into a solidly residential district of narrow streets, alleys and pathways, built on the hills of Hampstead and the adjacent heath. We pass homes with the “blue plaques” on their walls—the designation of someone historical and/or literary who lived in them. We will pass plaques for Robert Louis Stevenson, D.H. Lawrence, Joseph Priestly, the painter George Romney, and Sir Gerald du Maurier (an actor and Daphne’s grandfather); others nearby include Anna and Sigmund Freud, John Constable, and Richard Burton. Since the time of Keats, Hampstead has attracted numerous artists, writers, poets, and editors. The walk near the site of Leigh Hunt’s cottage

We’re doing a lot of uphill walking, with fairly frequent stops, some just for a short discussion and poetry reading. We hear the sonnet “On Peace, ” “On Myself” (a fun poem he composed for his sister), “When I Have Fears, ” and a portion of “Endymion” (only a portion; it’s 4, 000 lines of poetry). We cut through a corner of Hampstead Heath and find ourselves in the area called the “Vale of Health, ” the small village surrounded by the heath where Leigh Hunt, the editor of The Examiner who first published Keats’ poetry, lived with his family. Their cottage was torn down and replaced by something that looks like a bad 20th century outbuilding, suitable for renting, but the walled path alongside is not unlike what Keats would have known. We reach the street called “Well Walk, ” where Keats lived with his brothers George and Tom (the house was demolished a long time ago). They had rented rooms from the house owned by the postman, and it was the house where Tom Keats, the youngest brother, would die from consumption. From here George Keats would leave to get married and move to America, where he would get swindled by John James Audubon, of all people (yes, the artist).

A short walk up the street, and we’re officially on Hampstead Heath.

During the month of November, I’m posting each week on John Keats and his poetry. Last week, we began our walk through Hampstead in north London. Next week, we’ll continue the walk and discuss his connection to Hampstead Heath and the last two years of his life. The final post will consider his time at Wentworth House and what he wrote there.