There are five practical ideas for creating more powerful access to poetry; bringing it home is one of them—which, in its way, gets poetry happening around a table.

Poetry seems to attach itself to certain cities or regional areas. San Francisco had the beats. Chicago had Carl Sandburg. Kentucky has Wendell Berry. Hartford had Wallace Stevens. New Jersey had William Carlos Willams. And New York, well, New York had everyone else.

When one thinks of poetry, St. Louis doesn’t come immediately to mind. (Currently, it might immediately come to mind for other things, but not poetry.) And yet.

Billy Collins gives a poetry reading at the St. Louis County Library, and 800 people show up – a sell-out crowd, causing a traffic jam on a Saturday night.

St. Louis has the Eugene Field House, a three-story brick row house that was Field’s childhood home. While it is all that is left of its original row, and original neighborhood, it is still there, still attracting locals and tourists alike.

While he became a British subject, T.S. Eliot was born in St. Louis, and his family was involved in the founding of several educational institutions that are still flourishing today.

The St. Louis Poetry Center, founded in 1946, is the oldest poetry organization of its kind west of the Mississippi River. It sponsors readings, poetry slams, open mic nights, and general celebrations of poetry (and it’s amazing what it accomplishes on a shoestring budget; it depends largely upon area poets for support). Some weeks ago, my wife and I met Nancy Rosback, an online friend visiting St. Louis from Oregon, for dinner at the Tavern of Fine Arts. This is a restaurant fairly unique in our community; in addition to dinner, it hosts music performances, poetry readings lectures, art exhibits and other arts-related activities. Two nights after our dinner, we decided to go there for dinner a second time, with the main focus a poetry reading by Richard Newman, who had just published a new collection of poetry entitled All the Wasted Beauty of the World. (Newman also has an entry at the Poetry Foundation.)

Newman is something of a literary presence in St. Louis, editor of River Styx, a literary journal founded in 1975 and still going strong after 39 years. The journal has published work by Howard Nemerov, Ted Kooser, Derek Walcott, and many well-known writers. For years it hosted readings at Duff’s Restaurant in what we call the Central West End, but Duff’s closed in 2012, and that’s when the River Styx readings were moved to the Tavern of Fine Arts.

The reading was crowded, with about 100 people crammed into a space that would be tight for 60. The crowd, a cross-section of young, old and in-between, was enthusiastic. And Newman was charming, and funny, effectively using self-deprecating humor (the best and safest kind when you’re speaking). He read a number of his poems from the new volume, a few from his previous volumes.

Because we happened to have an empty chair at our table, he used it for signing copies of his book at the end of the reading. Everyone bought (or had) a copy, and he cheerfully signed each and every one. We were able to listen to the conversation, until we had our copies signed and we left.

Many of the poems in All the Wasted Beauty of the World are St. Louis poems, or containing references recognizable to St. Louisans – Bellefontaine Cemetery, Cahokia Mound, the Cardinals baseball stadium, the St. Louis Symphony, Benton Park (an old neighborhood about two miles south of downtown), not to mention the Asian carp which is threatening the fish in the Mississippi. But the poems transcend St. Louis, and become remembrances and meditations upon relationships, family, and more (including an ode to the ugliest woman in the bar and poems about a cockroach, a possum, and New Goshen, Indiana). Some of the poems use rhyme, less in a New Formalism way and more in a serious yet Eugene Field kind of way. 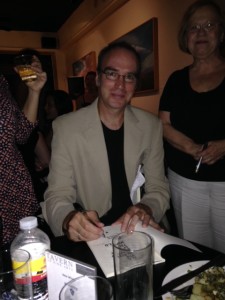 Richard Newman signing books at the Tavern of Fine Arts

His dad had kicked him down the hallway.
His tailbone won’t let him forget,
at 50, his twisted DNA.

In tumbling cowboy boot ballet,
smoke curling from a cigarette,
his dad had kicked him down the hallway.

He’d flown, light as papier-mâché,
too slow to dodge the booted threat
and later the twisted DNA,

wishing the mirror on the wall
opened to different wings, would let
him hide down alternate new hallways.

He feared the recoiling spring’s delay
and vowed that he would never set
hand , foot, or twisted DNA

against his own. He’d rather crawl
to his grave alone than ever beget.
His dad had kicked him down the hallway
And helped twist off their DNA.

The poem suggests a profound sadness, and yet the rhyming scheme simultaneously contains it and amplifies it. It’s a haunting scene – a child making the decision never to be a father because of physical abuse. It comes from the memory of a relationship.

Reading this poem, and the others in the collection, reminds me of how much St. Louis is composed of memory, including my own. Poetry is for life.

Photo by 96dpi, Creative Commons, via Flickr. Post by Glynn Young, author of the novels Dancing Priest and A Light Shining, and Poetry at Work.