Wearing a black suit and an orange shirt (Halloween was the night before), he looks around the room. “A poetry traffic jam is something I haven’t seen too often, ” he says. “This is wonderful.”

“Who are the other two?” she asks.

“I can’t remember their names offhand, ” I reply.

We are sitting in the main room of the St. Louis Country Library in Frontenac, Missouri, a suburb of St. Louis. Billy Collins is giving a poetry reading from his new work, Aimless Love: New and Selected Poems.

More than 800 people are in the room. My wife and I have what is a “package ticket” – two admission tickets and a copy of the book for $20. The volume retails for $16 for the paperback (just over $12 on Amazon), so the package ticket is a good deal. 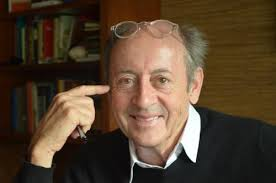 It is mostly but not entirely an older crowd, graying Baby Boomers but a fair representation of younger people as well. It’s the kind of crowd where you recognize faces but can’t quite connect a name to the face. I do recognize a former reporter for the St. Louis Post-Dispatch; we worked together on a project at Washington University in St. Louis more than a decade ago.

After an enthusiastic introduction by Steven Schreiner, poetry professor at the University of Missouri-St. Louis and founding editor of the school’s literary journal, Natural Bridge, Collins begins. And he begins with a polite admonition to the man sitting on the aisle three rows ahead of us, who has whipped out his cell phone and is already shooting a video. “I know it’s the thing to do, ” Collins says, “and everyone would like to be the first to post our time together on YouTube by 10 p.m., but I would like to ask everyone to refrain from doing that. A poetry reading is an intimate thing, not a video event. Thank you.” Abashed, the man puts his phone away.

Remember that word “intimacy” – it will be repeated later.

“You know me as a writer of dog poems, ” Collins says, “but recently a cat has appeared in our home, and she looks like she has something to say but forgot what it was. And so, because she’s there all the time, she’s gotten into a couple of these poems. Her name is Audrey, after a Dave Brubeck song.” He reads one, entitled “Lucky Cat, ” and the audience responds with laughter. In fact, the audience will laugh tonight at exactly all the right places. People are here because they know his poetry, his often funny, often profound poetry, and we know he has an uncanny sense of timing. He speaks just like his poems.

Most of the poems he reads come from Aimless Love, which draws upon four previous collections in addition to 51 new poems. When he begins reading “A Dog on His Master, ” I recognize it from Ballistics: Poems, published in 2008:

As young as I look,
I am growing older faster than he,
seven to one
is the ratio they tend to say.
Whatever the number,
I will pass him one day
and take the lead
the way I do on our walks in the woods.
And if this ever manages
to cross his mind,
it would be the sweetest
shadow I have ever cast on snow or grass.

He smiles after reading it. “They say, if you’re an author and you put a dog on the cover of your book, your sales increase 17 percent.”

Collins reads “Oh, My God, ” and draws a major laugh. Who knew teenage girls were so religious? It’s not only the words that creates the response, of course; it is how he reads it, how he introduces it, and how he offers a bit of droll commentary.

He reads more than 20 poems. He tells stories about his poems and poets. He is quietly engaging, almost understated, his humor dry and his insights sharp. And he is clearly having fun. Even he laughs when he reads “New England Haiku:”

Whose woods these are I
think I know his house is in
the village though, he.

And then he takes questions.

Are you writing these poems like they’re a performance? “No, when I’m writing, I’m writing in silence, thinking of someone in a quiet room, and she’s reading the book. I’m thinking of the poem being staged in the mind of the reader. A poem is an act of intimacy. I want to be alone with the reader. The fewer people you have in a poem, the more intimate you can be with the reader.”

Is your approach to prose the same? “In a poem, words have fun with each other. With prose, it’s just one damn thing after another.”

How do you know when to end a poem? “Your poem ends where the reader stops reading.” What was it like to be poet laureate? What are the pay and benefits? “You’re paid $35, 000 a year, which is exactly what they paid back in the 1950s. Back then, with a salary like that, you could move to Washington, D.C. and buy a townhouse. You do get an office in the Jefferson Building of the Library of Congress with a view of the Capitol, and you get a phone that never rings. You have to give a lecture and a seminar each year, which isn’t bad for $35, 000 if you didn’t have to live in Washington.”

We don’t stay for the autograph session. The line is well organized but it’s long. It’s 9 p.m. and we’re hungry. We’ll end up at a Mexican restaurant several miles away (it’s called Nachomama’s, if you’re interested) and see another couple who attended the reading.

The whole evening sticks in my head. Collins was charming and witty. He poked fun at himself. He’s likely the most recognizable poet in America and yet after two hours he seems like an old friend. It’s that word – intimacy.

One poem Collins read, “The Sandhill Cranes of Nebraska, ” has been criticized for being “remote from the social concerns of today.” Of course, why that has to be the defining characteristic of poetry is beyond me, but it’s a common enough criticism about Collins’ poetry in general – he’s not serious enough. Most likely, it really translates as “Collins is too successful to be a real poet.”

Collins read the poem in St. Louis the same way he read it last year at the University of California-San Diego; you can watch the video and enjoy Collins and his words having fun with each other.

It was a remarkable way to spend an evening – even with the traffic jam. I’d like to do it again.

Photo by Dania Do Svidaniya, Creative Commons, via Flickr. Post by Glynn Young, author of the novels Dancing Priest and A Light Shining, and Poetry at Work.