The life of Russian poet Marina Tsvetaeva reads like a microcosm of the tragedy that befell Russia in the first half of the 20th century. Born in 1892 in Moscow to an upper class family, she married fairly young, only to have her firstborn child, a son, raised by her in-laws, with her husband’s concurrence. Two daughters followed.

She published her first book of poems when she was 18, and she was something of an overnight literary sensation. She continued to publish, and then came World War I and the Russian Revolution. Her husband, Sergei Efron, joined the White Army during the Russian civil war. During the great Moscow famine in 1919, she placed her daughters in a state orphanage; one of them died of starvation. Three years later, the family fled Russia and eventually settled in Paris. They lived in poverty; her husband found work as an agent for the Soviet secret police. 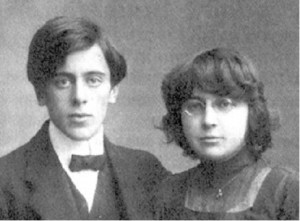 Returning to Russia in 1939, her husband was arrested and executed, and her surviving daughter was sent to a labor camp. She and her son fled eastward as the German armies invaded Russia. In August 1941, Marina Tsvetaeva committed suicide.

“In the Winter” is from a collection of selected poems entitled My Poems, translated and published in 2011 by poet Andrey Kneller.

The bells again break the silence,
Waiting with remorse…
Only several streets divide us,
Only several words!
A silver sickle lights the night,
The city sleeps this hour,
The falling snowflakes set alight
The stars upon your collar.
Are the sores of the past still aching?
How long do they abide?
You’re teased by the captivating,
New and shimmering eyes.

They (blue or brown?) are dearer
Than anything pages hold!
Their lashes are turning clearer
Out in the freezing cold…
The church bells have faded to silence
Powerless from remorse…
Only several streets divide us,
Only several words!
The crescent, at this very hour,
Inspires poets with its glow,
The wind is gusting and your collar
Is covered with the snow. It’s one of Tsvetaeva’s early poems, written before World War I. It is a love poem, a poem of longing (“Only several streets divide us / Only several words”), a poem that hints of a fading relationship. She wraps it all in the snowflakes, the cold, the darkness of the night.

The poems in the collection range in date from 1909 to 1938. Thematically they fit with “In the Winter”; you won’t find many allusions or references to the turmoil and tragedy she experienced throughout her life. These are poems of love and strong emotion, something of the poet’s trademark.

Kneller says that Tsvetaeva is still a beloved poet in Russia, with only Anna Ahkmatova as possibly more popular. Reading My Poems helps explain why—in the face of a series of monumental family and national tragedies, she uses love as a compass. It may be discarded love, a passionate love affair, unrequited love, or a love deliberately expressed from afar, but it is still love. With love there is still hope, even if the lover is no more.

Featured photo by Andrew Kuznetsov, Creative Commons, via Flickr. Image of poet by Basheer Tome. Sourced via Flickr. Post by Glynn Young, author of the novels Dancing Priest and A Light Shining, and Poetry at Work