The words that come to mind when reading This Alaska by Carlie Hoffman are gritty and sometimes jarring. And occasionally dark. Surprising, with a swing towards shocking. Consider “Continuum,” a poem about grief, that begins with “My mother split each day open / like a gutted fish.” Add vivid and arresting to that word list.

She remembers childhood through not entirely rose-colored glasses, like where she buried the dead gulls. Her explanation for moving to New York City, a city with so many lunatics, is that she sometimes becomes one of them. A visit to the zoo becomes a musing about a broken relationship. Eight years after she left, she watches a man sweeping the steps at her high school, and she hates him for not stopping to see her. (This longish poem, “Anniversary,” is my personal favorite in the collection, along with “Pact,” a poem about a desire to offer a small girl hope for the future.)

The collection is composed of 39 poems drawing upon experiences from childhood, youth, and adulthood. Many are set in Alaska, which in Hoffman’s hands becomes something different from the majestic vistas seen from the decks of cruise ships. This isn’t the tourist’s Alaska but instead a place that doesn’t seem so very different from those places where we all grew up.

Hoffman writes with a profound, if sometimes jolting, honesty. She’s one of the most effective users of metaphor that I’ve read recently. She avoids the faddish words often found in contemporary poetry, choosing instead to write in simple, direct language, which is more powerful as a result. She considers that dark streak in all of us, those impulses that an older generation might call original sin. When my sisters can’t scrub the oil
from the sick gull’s feathers, they dip

its wings, untie the cord that binds
the slow sheet of its body

and plant it into a wooden box
drilled with tiny holes. It is my turn

to bring the diseased bird
to the breeder across the bank:

his medicine knives, his hut occupied
with feeders and soap. But because I am

youngest, because a hunter’s moon
is how I locate heaven, I take the gull

down the wharf, kneel in an untouched
tract of snow, and quiet its skull with rock. 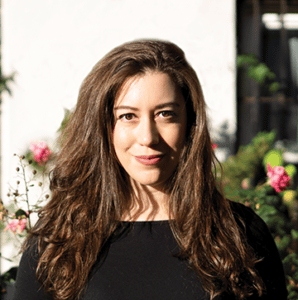 Hoffman received her MFA degree from Columbia University’s School of the Arts. While there, she received a creative writing teaching fellowship and a Philip Guston Endowed Writing Fellowship, and served as poetry editor of Columbia: A Journal of Literature and Art. Her poems have been published in a number of literary and other journals. She is currently the founding editor and editor-in-chief of Small Orange Journal. This Alaska is her first poetry collection; a second is forthcoming in 2023 from Four Way Books. A native of New Jersey, she lives in Brooklyn.

Reading This Alaska is not an easy journey. It will remind you of scenes from and incidents in your own life, including ones you might not be particularly proud of. These poems are a life considered, measured, and not found wanting.