Something more than physical happens as you age. You become more conscious of art, history, and family. You might discover the joys, and hardships, of family genealogy, and the story that your great-grandmother Leona was said to have killed a man but got away with it. Or that a great-great-great-great-uncle fought alongside Andrew Jackson at the Battle of New Orleans. As you age, you love hearing and telling these stories, and you realize that family stories have to be told because they make sense of who you are and who your children are.

Robert Selby is still a relatively young man, but he seems to have grasped this imperative of family stories. His poetry collection The Coming-Down Time, published in 2020, is filled with the kinds of stories that shape and resonate through families. The stories are both large, like those of war, and small, like the commute to and from work that ends with a joyful sense of freedom.

Selby divides the collection into three parts. “East of Ipswich” contains 20 poems largely about the Great War (1914-1918). “Shadows on the Barley” are more contemporary and perhaps personal poems, but with a sprinkling of war influences as well. “Chevening,” 12 linked poems bearing only roman numerals for titles, returns to war-related themes (Chevening is the name of the official residence of the British Foreign Secretary in Kent).

The poems in all three sections tell almost ballad-like stories. You sense the stories are personal, even if separated by a century or more from the Great War. These seem like family stories, passed down through generations — stories of soldiers walking through the destroyed villages of Flanders, the young men who go to war and don’t return, the regimental photograph. Aside from war, Selby writes of a funeral service; three moons of the planet Jupiter; a Land Girls story during the war; a visit to Brunswick, Maine; and a daily commute by train entitled “Shadows on the Barley.”

Shadows on the Barley When our train goes over the river
sending all the bridge bats aquiver
into the pink evening;

when the people’s shadow on the barley
is not wanting for company
and the castle turret is gleaming,

it’s time for that part of the day,
a few hours at least, that we can say
are ours. The train slows down

into the freedom beyond the tunnel,
into the redbrick commuter town
where we can peel off our office flannel,

for the can’s nozzle in every flower,
then you, in your PJs already,
post-shower bob a glorious melee,

feet up on the kitchen table reading
the paper you didn’t get to
on the morning train because, again,

we had slumped together in sleep,
in a jerking, dribbling heap,
dreaming of shadows on the barley. 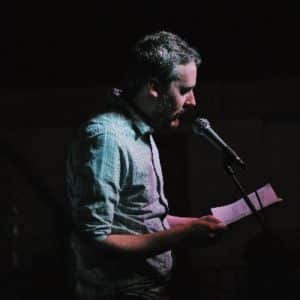 Selby received a doctorate from Royal Holloway, University of London, for his study on the life and work of the Scottish poet Mick Imlah, who died in 2009 at age 52. He’s co-edited a collection of Imlah’s poetry. His poems have been published in The Times Literary Supplement, The Guardian, New Statesman, Oxford Poetry, and other publications. He works as a freelance writer and serves as editor of the poetry journal Wild Court. Selby lives in Kent in England.