Some years back, my small suburb of St. Louis waged war against crows.

Residents were required to place household trash in plastic bags at the curb. The city even furnished the black plastic bags free of charge. We’d dutifully put out the bagged trash — only to see flocks of crows gather for the attack. Some would artfully bore a hole in a bag of trash and extract whatever might be available. Other crows would bludgeon the bags with great rips and tears, distributing garbage all over the grass and street.

Neighbors held meetings. Advice was shared. Suggestions were made. Scarecrows were a non-starter. Spraying Lysol on the bags was only a very temporary deterrent. Running out and yelling at the birds worked as long as you physically guarded your garbage. Admitting defeat, we knew the crows had won. They don’t call a flock a murder of crows for no good reason.

I was reminded of our crow wars when I read Rainbow Crow: poems in and out of form by Megan Willome and Hasani Browne, a beautifully illustrated book for young readers that introduces various poetic forms. And it does so with poems about crows. Remembering the scenes of my garbage strewn about my lawn, I will admit to a nostalgic feeling of wanting to strangle a crow as I read this delightful book.

Willome includes catalog poems, an acrostic poem, a rondelet, a quatrain, a clerihew, a ghazal, and more. All about crows. She writes about crows falling in love, tormenting dogs, tricking squirrels, and attending crow school. One poem even describes an elderly lady’s success in getting rid of the pests (by threatening to eat them). The poems and the illustrations are filled with a kind of exuberant joy, tinged with a sense of play and mischief. Exactly like young children (and, some would say, crows).

This rhyming couplet poem perfectly describes the mindset of a crow. 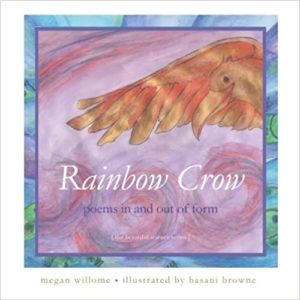 Some say a raven scouted land,
proceeding from old Noah’s hand.
The raven flew both far and near
but never did return. Oh, dear.

Then Noah sent a soft white dove
who picked an olive branch with love.
When Noah sent her out again
she stayed to rest. The flood did end.

But if instead he’d sent a crow
to look for land, both high and low,
that crafty bird, so sly and wily,
would have returned with poison ivy.

That’s exactly what a crow would have done, except it would have brought enough poison ivy to afflict every human and animal on board the ark. And then laughed about it with his crow friends down at the Ye Olde Crow Bar and Filleted Garbage Bag. Willome, an editor and weekly columnist here at Tweetspeak Poetry, is a poet and writer. She previously published The Joy of Poetry: How to Keep, Save & Make Your Life with Poems. She’s a contributing writer for Rock & Vine and the Art Guide, both published by the Fredericksburg (Texas) Standard, and writes poetry prompts for Chronic Joy. She and her family live in Texas.

The wonderful illustrations accompanying the poems are by Hasani Browne, an artist and graphic designer born in Saint Vincent and the Grenadines who now lives in Brooklyn. She received her bachelor’s degree in Graphic Design with a minor in Art History from Purchase College, SUNY.  Rainbow Crow is her first book, and she has managed to capture the crow’s sense of mischief and devil-may-care attitude. In her illustrator’s note in the book, she says the first time she saw a crow was when she was 13 and still living on her native island. Crow sightings were highly unusual, but there sat the crow in a plum tree. He was probably scouting for a garbage bag. Rainbow Crow is a delightful book for children and adults. Despite my own experiences with crows, I was charmed by the poems and illustrations. And I can’t wait to read a few of these poems to my youngest grandson, who’s about as mischievous as a crow. He might learn something about crows, and poetry.

My personal crow story has an ending. One year, the crows disappeared, felled by the West Nile virus. While the garbage wars were over, it seemed something short of a victory. Years later, they came back (the location of our garbage bags was implanted in their DNA), only to discover that our city had switched from bags to plastic barrels that could be automatically emptied into trucks. For a few days, we saw the crows land and inspect the barrels, and then fly away for more hospitable offerings.

I felt a sense of loss. I almost missed the battles of the Crow Wars.

Do you have a crow story to share? Tell us in poetry or prose. If you tell us poetically, you could also try your hand at one of the forms that Willome explores in the book: the ghazal, rondelet, quatrain, acrostic, or catalog poem (to name a few).

The Joy of Poetry by Megan Willome