The collection explores aspects of the heart, its loves and losses, disconnections and sorrows, its emotions, its celebrations and mournings, and its journeys. The photographs all include the image of a heart, sometimes found and sometimes artfully arranged. The result of this pairing of poems and photographs is striking, each serving as a commentary and further defining of the other.

One particularly impressive photograph (which is saying something; all of the photographs are impressive) appears to be a cracked stone heart, colored in a royal blue and light tan, with splashes of gold. You study the photograph and wonder if it represents a broken heart or something else. (It’s also the cover photograph.) This is the poem by Hafer that accompanies it. Though they’d never met,
the man with the dead man’s heart
inside him dreamed his donor’s
face, limbs, lungs; sung in his sleep
the dead man’s favorite song
in the deep baritone voice
that wasn’t his own but
his, the one not known or seen or heard,
except in night’s deep cradle of sleep,
this stranger’s metronome of a heart
humming behind ribs that no longer
felt like his—beautiful fence
for an organ lifted from someone else’s
afterlife. Even waking, the new-
old man and his heart now know
nothing of old boundaries, the ones
composed by the living. Instead,
in bright, silent daylight,
he takes his first,
tentative beat
toward love.

Begin with a Question at first seems a more conventional poetry collection, comprising 74 poems. Its title poem, the first in the collection, does indeed begin with a question (“But why?”), taken from a poetry prompt in How to Write a Poem by Tania Runyan.

The poems cover diverse subjects. They consider family, pandemic quarantines, illness, an encounter with a nun from Nigeria at a jazz concert, a woman’s retreat, Bram Stoker’s Dracula, nature, church hymns, and blizzards, among many others. Hafer composes with a poet’s eye, seeing the small things and understanding how they speak to larger things.

While the two collections are very different, one poem directly hinges them. Included in both is “Heart, Lichen, Stone.” In Heart Speaks, Is Spoken For, it is paired with the Elias  photograph entitled “Heart Holding On.” In Begin with a Question, its inspiration from the photograph is noted after the title. 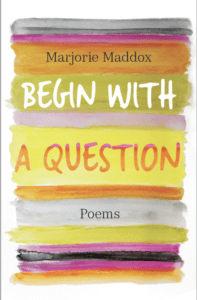 This is what they know:
the dip into frigid;
the shadowed shelter of cave;
the beauty of decay at dusk, at dawn;
the tattooed rays of one more orbit
of earth around a sun that says, “Hold on,
hold on, hold on.” And they want to,
and they do, and they will, lingering
a little longer beneath the open branches
of forest, beside the cool stream of hope,
waiting for you, for me, for whoever
stumbles first down the long path
calling their names. Hafer is the author of 10 previous poetry collections, including Nightrider to Edinburgh (1986), Body Parts (1999); Transplant, Transport, Transubstantiation (2004 and republished by Wipf and Stock Publishers); Weeknights at the Cathedral (2006); Local News from Someplace Else (2013); Perpendicular as I (1999 and 2013); and True, False, None of the Above (2018). She is the co-author of the anthology Common Wealth: Contemporary Poets on Pennsylvania (2005) and author of two children’s books, including Rules of the Game: Baseball Poems (2009). Hafer is a professor of English and Creative Writing at Lock Haven University in Pennsylvania.

Elias taught college English for 40 years. She now uses photography to examine and display that fragility of the natural world. Her work can be found in private collections, has been exhibited numerous times, and has won several awards.

It’s difficult to imagine or understand the work involved in publishing two poetry collections so closely together while holding down a full-time job, not to mention family responsibilities. (I published two novels and a nonfiction book within two years while holding down a full-time job, and that was physically exhausting.) The benefit of the these works by Hafer, however, largely accrues to the reader. With Heart Speaks, Is Spoken For, the reader can see how the pairing of marvelous poems and photographs creates something remarkably new and challenging. With Begin with a Question, the reader experiences careful and measured craftsmanship. And you end with a question: how did Hafer pull this off?