In 1919, the English publisher William Heinemann released a volume of poetry entitled Spirits in Bondage: A Cycle of Lyrics. The collection was part of a flood of British poetry works that flowed copiously during and after World War I, joining collections by Rupert Brooke, Wilfred Owen, Charles Sorley, Francis Ledwidge, Robert Graves, Edmund Blunden, and other “World War I poets,” many of them published posthumously.

The author of Spirits in Bondage published the work under a pseudonym, Clive Hamilton. His real name was Clive Staples Lewis. The collection wasn’t republished until 1984, and in 1994 it was included in his Collected Poems. Lewis wrote most of the poems between 1915 and 1918, when Lewis was in military training at Oxford and then in France on the Western Front. 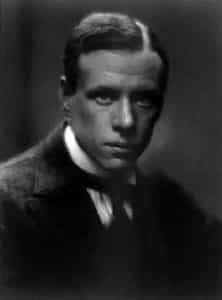 C.S. Lewis as a young man

The 40 poems in the volume represent Lewis before his conversion to Christianity. A few relate directly to the war; many are nature poems and poems populated with mythological and classical figures. They are very much in the classical vein of poetry that was popular in the late Victorian and Edwardian periods, including during the war.

The collection is divided into three sections. Part I, “The Prison House,” includes 21 poems. Part II, “Hesitation,” comprises only three poems. Part III is entitled “The Escape” and includes 16 poems. Throughout the volume, there are repeated mentions to God, but it is a God who is at best a cultural deity, one distanced or indifferent to humanity. Yet the religious influence is obvious, from titles like “Satan Speaks,” “Hymn,” and “Our Daily Bread” to the subjects covered.

One poem that deals directly with the war is “Death in Battle.” In it, the poet imagines himself to fall in battle, not an uncommon thought among soldiers and especially those of this war, who experienced long periods of tedium punctuated by gruesome slaughter on a wholesale basis. Open the gates for me,
Open the gates of the peaceful castle, rosy in the West,
In the sweet dim Isle of Apples over the wide sea’s breast.

Open the gates for me!

Sorely pressed have I been
And driven and hurt beyond bearing this summer day,
But the heat and the pain together suddenly fall away,
All’s cool and green.

But a moment agone,
Along men cursing in fight and toiling, blinded I fought,
But the labour passed on a sudden even as a passing thought,

Ah, to be ever alone,
In flowery valleys among the mountains and silent wastes untrod,
In the dewy upland places, in the garden of God,
This would atone!

I shall not see
The brutal, crowded faces around me, that in their toil have grown,
Into the faces of devils – yea, even as my own—
When I find thee,

O Country of Dreams!
Beyond the tide of the ocean, hidden and sunk away,
Out of the sound of battles, near to the end of day,
Full of dim woods and streams.

The poems of Spirits in Bondage are those of their time, reflecting the classical influence with its metered and measured rhyme. Yet they also transcend their time, exhibiting a somber beauty that speaks to us a century later.

Note: a word on available editions. Spirits in Bondage is the first publication by C.S. Lewis to go off copyright in the United States. In the past few years, several editions have been published — one with an introduction by Karen Swallow Prior (available as an ebook, hardback, paperback, and audiobook); one in Kindle edition only; one in paperback and hardback only; one in the three standard formats; and one in Kindle and hardback. Prices range from free to $31.99.