It was a chance reading of an article on poetry that led me to Catharine Savage Brosman. That, and a reference in the article to her having taught for 35 years at Tulane University. I found other poems of hers online, and I became so interested in my fellow New Orleanian that I ordered one, and ultimately three, of her later collections.

What I found was an inquisitive mind, ranging over subjects as diverse as flowers, the Empress Eugenie’s flight from Paris in 1870, a New Orleans wine bar, False River in Louisiana’s Point Coupee Parish (part of the old Mississippi cutoff when the river changed course), Antarctica, postmodernism (she’s not a fan), and the landscape and geography of western Colorado.

And travel. A considerable number of the poems in these three later collections are about travel; almost all of her most recent collection, A Memory of Manaus, is about travel. And not only travel, but also the people she travels with and the people she meets. Her remarriage to her first husband Patric Savage created significant changes in her life — a move to Houston and a joint decision to travel were only two. (Savage died in 2017 at the age of 88; I learned that he was born in St. Louis, where I now live, and he worked for most of his career at the same company I worked for when I lived in Houston.)

The references to her husband in these poems suggest they may be as much about him as the subjects she’s writing about. Through the three collections, we follow changes in his health, including his later use of a wheelchair.

Even when he’s not directly or indirectly mentioned, one senses the influence of her “once and now again” husband. Among the 48 poems of Breakwater (2009) are six about Colorado, and the reader knows Brosman is seeing canyons, Pike’s Peak, and other landscape features with someone. The collection is also filled with poems about historical and literary figures and events — like D. H. Lawrence in New Mexico and the Germany army burning the library at Louvain, Belgium, in 1914. She includes a faintly funny poem to former students about “the old professor falling in love,” and also this small gem about a church she visits. In the church at Chimayo,
the women are bending,
rounded and brown as loaves
of bread. Silence
ripples in the stones.
Slipping down their beads,

the litanies flow
past island of votive light,
into a stream of shadow.
Theirs is the spirit
broken, the body
of need. On the hillsides,

grain is ripening now.
Think of them as a retablo,
the center radiant,
even the figures
at the periphery giving
the evidence of grace.

Breakwater is a collection worth reading again and again, to see how this poet highly conscious of language artfully uses it in her poetry.

Brosman follows a similar framework in the 70 poems of On the Old Plaza (2014). The subjects range from dinner at Brennan’s Restaurant in Houston (almost exactly like its progenitor in New Orleans) and a visit to the Jefferson Barracks National Cemetery in St. Louis to plants and flowers and even more travel poems.

Twenty of the poems describe a cruise through the Suez Canal, down the western coast of Central and South America, and finally reaching Antarctica. The poems read like travel diary entries, but with Brosman’s fine eye for image and detail. 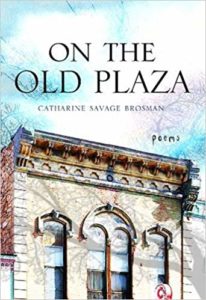 We stream on color: blue, aquamarine,
dove gray. To look straight down gives vertigo,
but farther out the surface seems serene,
both concentration and reflective flow.

Horizons offer us expanse—confine
Us, also. Every wavelet, though unique,
Resembles all. The latitudes decline;
There’s almost no dusk, southward. In a week,

The reader glimpses Patric’s declining health. He’s not able to do all the walks and climbs, but he compensates by sitting and suddenly bursting into operatic arias, suitable for the specific surroundings.

A Memory of Manaus, Brosman’s last published collection, was published in 2017, the year of Patric’s death, and includes 57 poems. There’s no reference to his death in the poems; in fact, he’s still traveling with his wife down the Amazon to Manaus (home of the famous jungle opera house), to London for the British Museum, to Spain and Morocco, and to Brittany and France. Brosman maintains her travel diary approach in the poems related to these trips.

But she also writes on other subjects — Charles Dickens visiting Niagara Falls, Charles Dodgson on the Thames River, and what she thinks of both a magazine critic and a postmodern publisher (the answer — not much). And she includes this small poem, which almost seems anticipatory.

Flowers on a Train They met at Euston Station for their last
farewell, the coda to a London tryst.
“Goodbye, goodbye!” The moment came, and passed.
She lingered, found her quay, but almost missed

the train when he returned with a bouquet
bought hastily next door; exquisite blooms,
white roses, iris, daffodils, a spray
of baby’s breath, the thought of many rooms.

He pressed them on her in a quick embrace.
In tears, she ran, climbed up, and got a seat.
She held the flowers like a bride, her face
more radiant in despair, the break complete. Brosman is professor emerita of French at Tulane University in New Orleans and held the Gore Chair of Studies until her retirement in 1997. She is the author of 11 poetry collections, two collections of essays, several translations of French poets, and numerous scholarly publications on Louisiana poetry, French literature and culture, literary studies, art, history, and women’s studies. She received a B.A. degree in Romance Languages, an M.A. degree in French, and a Ph.D. degree in French, all from Rice University in Houston. A resident of New Orleans for almost 40 years, she lives in Houston.

The poems of Breakwater, On the Old Plaza, and A Memory of Manaus are, ultimately, love poems. What is clear is that she fell deeply back in love with her first husband, and that they made the most of the time they had together for a final decade. One can almost picture him handing her those flowers at the train station. He’s remaining in time and memory, while she continues on.

Rarely have I been as moved a poetry as I have by these three collections.