It began as a drought. Farmers in 1930 looked up at the sky and wondered where the clouds had gone, and with them, the rain. For an area the size of three-fourths of the state of Texas, including the Texas and Oklahoma panhandles, the western half of Kansas, the eastern half of Colorado, and parts of Nebraska and New Mexico, the rain wouldn’t return until 1939. At times, most of the United States was affected by the drought, but no region experienced what the southern Plains went through.

The land dried up. The wind blew. Dust storms reached the East Coast. By the end of the 1930s, some 2.5 million people had migrated west to escape what came to be called the Dust Bowl. It was the agricultural counterpoint to the Great Depression, and it was part of an era when hunger became familiar to millions of Americans.

Poet Benjamin Myers uses the 54 poems of Black Sunday to explain, interpret, and illustrate what happened in those years. You read these poems in somber stillness. You look out your window and consider what your own landscape would be with grass dead, gardens parched into sticks, the limbs of trees reaching upward like unanswered prayers.

Myers uses the voices of six fictional characters to tell the Dust Bowl story in poetry. Will Burns is a farmer in the Oklahoma Panhandle who remains throughout the entire period. His wife Lily has her own perspective. Louise Burns is their daughter, speaking long after the drought has passed but remembering what it was like to be a child. Ms. Manvel is the teacher watching her class diminish one by one as families leave. The Reverend is the local Presbyterian minister, who will be tending the grave of his wife when he’s caught in a dust storm. And Henry is the town drunk. Together, these six people will tell us what happened, using their own stories and experiences.

Read the hopelessness in the voice of farmer Will Burns.

Will Burns on the Great American Desert 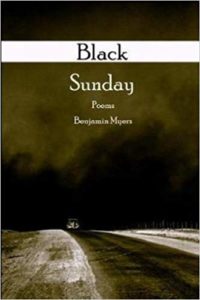 A desert waste is what this place is now
and all it’s ever going to be. The land
ain’t ours. Blowing over itself, the sand
will take it back. The rain follows the plow
men said, but then it didn’t rain. The cow,
the buffalo, Indian, and ranch hand
should have it back, and can, if they can stand
to live here now the dirt’s begun to blow.
But I ain’t got no place to go. I’ll stay
and let that mean old sun burn me new shades of brown.
I’ll let the blowing sand eat at my skin
until my outside layer’s blown away
and nothing’s left but muscle and raw bone.
I was a man, once. What will I be then?

In another poem, Lily describes the foreclosure auction on their farm, and how the neighbors will make sure no one except Will can bid mere pennies so he can keep his land. She will also describe trying to clean the dust from her child’s eyes. Will describes “Black Sunday,” when all you could see was dirt. In the final poem in the collection, the long and extraordinary “The Faith Healer,” a child is discovered with the gift of physical healing, and soon she and her family are overwhelmed by people seeking deliverance from afflictions. Myers, associate professor of literature and poetry writing at Oklahoma Baptist University, served as poet laureate of Oklahoma from 2015 to 2016. He is the author of two previous collections, Elegy for Trains (2011) and Lapse Americana (2013). Elegy for Trains won the Oklahoma Book Award for Poetry, and his work has been published in numerous literary journals. He received his B.A. degree from the University of the Ozarks and his M.A. and Ph.D. degrees in literature from Washington University in St. Louis.

Memories of the Dust Bowl have receded in American history. Telling the stories of the time and region in poetry, as Myers has done in Black Sunday, does more than remind us of a historical period and event. These poems bring a truth to what happened in ways that history books can’t.

The Dust Bowl: A Film by Ken Burns

Photo by Marilyn Peddle, Creative Commons, via Flickr. Post by Glynn Young,author of Poetry at Work and the novels Dancing Priest, A Light Shining, Dancing King, and the recently published Dancing Prophet.