For Aisha Sharif, life took an abrupt turn when her upper-class Memphis-born African-American father found the stability he was looking for in Islam. She was a child, with two sisters and two brothers. Their mother came from a strong Roman Catholic family in St. Louis. The family converted to Islam. Sharif went from wearing shorts and twirling a baton as a junior majorette to discovering white leggings under blue jumpers and silk-scarf hijabs.

To Keep from Undressing is Sharif’s first collection of poetry. It tells two stories — the story of becoming Muslim as an American, and as a black woman. Its 48 poems range in subject and approach. Some question people, like her father and a boy who snatched her hijab from her head in school. Others tell stories, such as helping her sister leave an abusive husband. One poem describes the everyday experience of going through security at the airport, an experience common for anyone who flies but never easy for a Muslim woman who flies. I stood there, arms stretched up
and out, TSA officer patting me down.
I should have known better,
worn short sleeves, tighter jeans,
hot pink or baby blue, not brown, not black.
I should have pulled this hijab back
in a bun, worn hoop earrings, tried to appear
less foreign. I should have
let it fall, carried it like nothing,
a shawl. Instead, I chose habit
draped over ears, below my chin
and ignored the possibility
of not passing.

I watched her press my head, my neck,
behind my ears, my chest.
Just making sure, she said,
facing me, as if she could not see
through this curtain of difference.
She pressed and pressed, stared
and pressed, not wanting to believe
that I could be safe and Muslim.

Sharif finds herself in the margins between cultures, and that is where the power of her poems comes through. Like the TSA agent, Americans may be suspicious, but Saudi friends point out her “difference” as well, correcting her pronunciations of Arabic words, just as English teachers corrected her pronunciations of English words. And she finds herself facing the practice of polygamy, how women in Arabic countries are treated during divorce proceedings, and how a hijab can hide the marks of a husband who beats his wife. 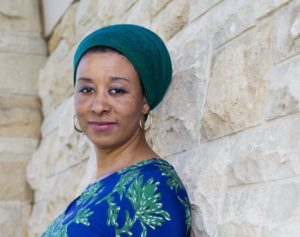 Sharif is a Cave Canem Fellow and has been published in such literary journals as Rattle, Crab Orchard Review, Tidal Basin Review, and Calyx. She received a B.A. in English from Rhodes Colleges in Memphis and her M.F.A. in Creative Writing at Indiana University, Bloomington. She teaches English at Metropolitan Community College in Kansas City and lives in Shawnee, Kansas.

The poems of To Keep from Undressing are about a woman comfortable in her faith but finding herself rubbing up against the rough edges of American culture, prejudice, and practices acceptable for many in her faith but not for who she is as a person. While those experiences aren’t unique to Muslim women, they do require her to deal with them daily. And that’s the sense of this collection—telling the story of a Muslim woman in America, a woman who also happens to be black. It’s a powerful collection.

A Muslim woman, her Catholic grandmother and their overlapping lives

Photo by Anathea Utley, Creative Commons, via Flickr. Post by Glynn Young, author of Poetry at Work and the novels Dancing Priest, A Light Shining, Dancing King, and the newly published Dancing Prophet.