In 1916, Mary Borden was 30 when she found herself managing a field hospital on the Somme River in France. Casualties were pouring in from the front; the Battle of the Somme started July 1 and would continue for months. Ultimately, more than 3 million men were involved, with a million casualties. On the first day of battle, the British alone suffered more than 57,000 casualties.

And there were Mary Borden and her hospital staff, watching the carnage pour through their hospital doors. She found solace in writing poetry. Mary Borden during World War I

An American, Borden was born in 1886 in Chicago to a father who would make a fortune from silver prospecting in the American West. While she was at Vassar, her father died, leaving her a large fortune. She began to travel, met and married George Douglas Turner, a Scottish missionary in India, and then returned to London with her husband in 1913. She discovered the women’s suffrage movement and became one of its most ardent activists.

She published a first novel, The Mistress of Kingdoms, and began to socialize with such writers and poets as Ford Madox Ford, Ezra Pound, George Bernard Shaw, and E.M. Forster. She had an affair with the painter Wyndham Lewis.

War was declared in August 1914, and a pregnant Borden volunteered for the French Red Cross. She eventually financed and established a field hospital for French soldiers, where she served as the director for the women nurses. It was there that she met a British officer, Captain Louis Spears, who was looking for members of his company. They set up a house in Paris; her husband would later file for divorce in what became a scandalous case.

Borden began writing poetry during her war years. She was best known for The Song of the Mud, which was about the omnipresent substance that became a symbol of the war. She also wrote a number of sonnets, numbered but untitled. This one captures the moment in war that two lovers share, knowing that each moment may also be the last. 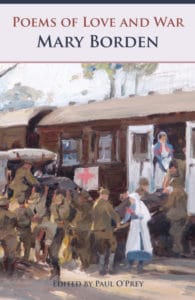 Because we know that there will never be
Any more time when this our time is done,
Because we know there is for you and me
No other place under another sun
And that our day is bounded by a night
Impenetrably dark, boundlessly deep
Let this our fearful day be full of light
Let this our day be sweet.
Let us be glad for this our little time
More glad than ever lovers were before
And let us dare to fashion the sublime
Within the ghostly chasm of the war
Standing together in the roaring gloom
At peace before our sure advancing doom.

Borden went on to marry Spears after her divorce. She also lost most of her fortune in the 1929 stock market crash and depended upon her income from writing, both fiction and nonfiction. The Forbidden Zone, published in 1929, was a collection of sketches and stories based on her hospital work during the war. She also established an ambulance unit at the beginning of World War II, which saw service in both France and the Middle East. In recognition of her service in World War I, she became the first American woman to receive both the Croix de Guerre and the Legion d’honneur. She died in 1968.

Her poems were not published as a collection during her lifetime; Poems of Love and War was published in 2015 and includes poems from The Forbidden Zone as well as the sonnets she wrote to Spears. She had an observant eye for the destruction brought by war and a passion for love that still burns brightly a century later.

Photo by NathalieSt, Creative Commons, via Flickr. Post by Glynn Young, author of Poetry at Work and the novels Dancing Priest, A Light Shining, and the newly published Dancing King.