I’ve watched a video on Facebook that I almost can’t stop rewatching. It’s produced by Jay Shetty, a British relationship coach, host, former monk, and, as he says, someone who is all about “making wisdom go viral.” Just so you know, Shetty has 14 million followers on Facebook, 1 million followers on Instagram, and 800,000 subscribers on YouTube. His web site has received more than a billion views.

What likely caught my eye about the video is that it’s filmed on a bridge I’ve walked many times—the Millennium Bridge over the Thames in London, which connects the Tate Modern on the South Bank and St. Paul’s Cathedral on the North Bank. The video tells the story of Jack and Louise, and it’s entitled When You Bump into Your Ex. (It’s not yet posted on YouTube; if it were, I’d include that link.) They meet by chance, and it’s clear they’re still in love with each other, but each misunderstands what the other is saying.

I find the video fascinating because it powerfully tells a story, a love story. And it didn’t help that I’d been reading I Hope This Reaches Her in Time, a new poetry collection by Instagram poet r.h. Sin, which could almost serve as the script for the video.

The reading (and purchase) of poetry has been on the upswing since 2012. Most of that upswing, if not all of it, has been happening on the Internet—social media, blogs, and online literary publications (like Tweetspeak Poetry). Poets have been especially active on Instagram, where their words are paired with often striking photography or intimate-feeling images—with names you may not have heard before—Rupi Kaur, Amanda Lovelace, Yrsa Daley-Ward, and r.h. Sin, among others. Their followers number in the millions. They gather their Instagram poems and publish them as collections, creating instant bestsellers. Kaur has published two books of poetry; between them they spent 145 weeks on The New York Times bestseller list.

Sin has published several poetry collections, all of them since 2016. He’s something of a “phenom.”

The poems of I Hope This Reaches Her in Time are untitled, so they become a kind of extended and deeply related narrative. That narrative is a love story, with its love both requited and unrequited. Sin speaks of temporary loves and permanent ones, if there’s such a thing as permanent in this Instagram universe. Perhaps he writes a narrative of many love stories, and the emergence of these poems on the Instagram platform, with its attendant visual backdrop, shapes them that way. 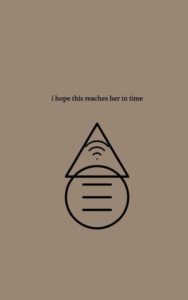 Some of the poems are so short, a line or two, that they appear to be more like aphorisms: “the heartache will teach you / then peace will fill you.”

If it’s not obvious yet, it should be noted that Sin is averse to capitalization and punctuation, which turns out not to be a problem. But if you like short love poems, ones that try to offer a little relationship wisdom, then I Hope This Reaches Her in Time is a good collection of them.

The primary audience for the Instagram poets seems to be younger Millennials and the older members of Generation Z, roughly people between 18 and 24. This dramatic increase in reading poetry doesn’t appear to have spread to established, more traditionally published poets. But it’s nonetheless encouraging to see younger adults engaging with poetry.

I wonder what the poetry of Walt Whitman, T.S. Eliot, and Emily Dickinson might have looked like on Instagram. Or perhaps Jay Shetty filming a video entitled “Crossing Brooklyn Ferry” or one of Elizabeth Barret Browning’s sonnets. It’s a different world, all right.

Photo by Vanessa Porter, Creative Commons, via Flickr. Post by Glynn Young, author of the novels Dancing Priest, A Light Shining, and the newly published Dancing King, and Poetry at Work.