The Walt Whitman Award is given by the Academy of American Poets for a first published poetry collection. The winner is not selected by a panel of judges but instead by a single judge named by the academy. For 2017, poet Juan Felipe Herrera, U.S. poet laureate from 2015 to 2017, served as the judge. And his selection was Eye Level by Jenny Xie.

It’s easy to see why. Just read her poems. Xie was born in Hefei, China, and grew up in New Jersey. Now a teacher at New York University, she received degrees from Princeton University and NYU. She’s also received fellowships from several organizations, and her poems have been printed in American Poetry Review, Poetry, New Republic, Tin House, and other literary publications. Xie had previously published a chapbook, Nowhere to Arrive, which received the 2016 Drinking Gourd Chapbook Prize.

Call her the poet of spareness and precision.

She’s a poet who doesn’t waste a single word. Reading the 41 poems of Eye Level is an exercise in experiencing powerful minimalism. In fact, I was reminded of two things as I read them—the short stories of Raymond Carver and the idea that haiku might possibly be longer than three lines.

Consider this poem, and how Xie uses just a few words to describe what it means to settle in a new country, with a new language and a new culture. 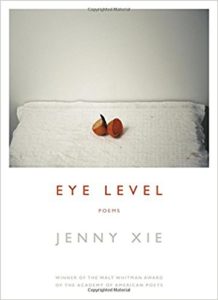 His tongue shorn, father confuses
snacks for snakes, kitchen for chicken.
It is 1992. Weekends, we paw at cheap
silverware at yard sales. I am told by mother
to keep our telephone number close,
my beaded coin purse closer. I do this.
The years are slow to pass, heavy footed.
Because the visits are frequent, we memorize
shame’s numbing stench. I nurse nosebleeds,
run up and down stairways, chew the wind.
Such were the times. All of us nearsighted.
Grandmother prays for fortune
to keep us around and on a short leash.
The new country is ill fitting, lined
with cheap polyester, soiled at the sleeves.

This same economy of language is applied to observations of such disparate geographies as Phnom Penh and Corfu, the stories or old wives’ tales she heard as a child, looking at Chinatown, celebrating the Lunar New Year, and more. It’s as if Xie, feeling the rootlessness of emigration (and “Rootlessness” is the first poem in the collection), embraces tight, simple language as a way to find her place.

Eye Level is a moving collection, with poems filled with wonderful and often surprising lines, using precise capsules of words.

Photo by Jonathan Kos-Read, Creative Commons, via Flickr. Post by Glynn Young, author of the novels Dancing Priest, A Light Shining, and the newly published Dancing King, and Poetry at Work.