About the year 1136, Geoffrey published The History of the Kings of Britain. The account began with the founding of the British nation by the Trojans after the Greek-Trojan War, continuing through the arrival of the Anglo-Saxons in the seventh century. The work included the first known account of King Lear and his daughters, and it included an official account of King Arthur, the Knights of the Round Table, and the prophecies of Merlin. 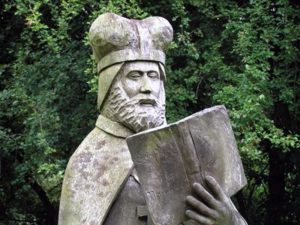 A wooden statue of Geoffrey of Monmouth in Wales

The work was accepted as history well into the 16th century. It turned out to be mostly but not entirely fiction. But it was Geoffrey who first formalized the legend of King Arthur, which was further elaborated by Thomas Malory (1415-1471) and his Le Morte d’Arthur. (It was a Frenchman, however, Chretien de Troyes, who added Lancelot and the Holy Grail to the story.)

Arthur is a legend that still captivates—the idealist warrior who wanted to govern in a different way but ultimately betrayed by those he loved most, and those who loved him. Arthur has given us some of most enduring literary works, including Idylls of the King by Alfred Lord Tennyson. He’s also given us the widely popular versions of the story, including the Disney movie The Sword in the Stone, novels by Mary Stewart, and the Broadway musical and movie Camelot.

Even J.R.R. Tolkien tried his hand at describing the legend. Sometime in the late 1920s or early 1930s, Tolkien turned his hand to writing an epic of Arthur. This wasn’t to be a retelling of the story. Instead, it was to focus on Arthur’s last days, the collapse of his kingdom, and the war with his nephew Mordred. And this being Tolkien, lover of ancient English and Nordic languages, it was to be written in Old English alliterative meter.

He made a good start. He had a friend and fellow professor read his work in progress (this was before the Inklings). The friend was enthusiastic and urged Tolkien to continue. And he did, for a time, but other preoccupations—likely The Hobbit—soon condemned the Arthur manuscript to the filing cabinet.

It was Tolkien’s son Christopher, his literary executor and editor of so many of Tolkien’s lost tales, who rescued the manuscript. It was a relatively short (for an epic) five cantos, but those five cantos were a tantalizing hint of what might have been. Christopher published the fragment of the epic along with three excellent and related essays of his own as The Fall of Arthur in 2013.

Here is an excerpt from the second canto of the poem. The Round Table has collapsed. Arthur and Gawain are away on the continent, fighting a war. Lancelot is in something of self-exile. And Mordred, Arthur’s scheming nephew, has set his sights on Queen Guinevere. Mordred was waking.   His mind wandered
in dark counsels   deep and secret.
From a window looked he   in western tower:
drear and doubtful   day was breaking,
grey light glimmered   behind gates of cloud.
About the walls of stone   wind was flowing;
sea sighed below,   surging, grinding.
He heard nor heeded:   his heart returned
to its long thralldom   lust-tormented,
to Guinever the golden   with gleaming limbs,
as fair and fell    as fay-woman
in the world walking   for the woe of men
no tear shedding.   Towers might he conquer,
and thrones o’erthrow   yet the thought quench not. Arthur and Gawain get wind of what’s up and hasten back to Camelot. Gawain is able to cross the channel faster than expected, and the stage is soon set for the battle to come. And there the fragment ends.

Christopher Tolkien’s three essays (each longer than the entire fragment of manuscript) examine the poem in the Arthurian tradition; the relationship between the poem and The Silmarillion; and how the poem evolved. He describes how he pieced together his father’s intentions, studying margin notes, correspondence, and other sources.

The Fall of Arthur has to fall in the category of “what a wonder we might have had but don’t,” but Christopher Tolkien’s rescue of the manuscript and his own scholarship add to the ongoing tradition of the legend of King Arthur.